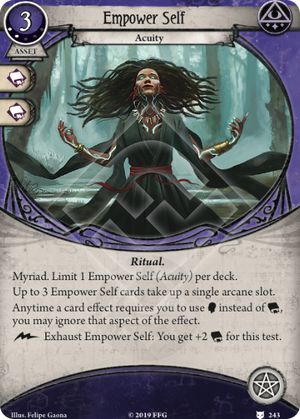 At the time of writing — Empower Self is fresh off the press — these cards are generating much discussion, here and elsewhere, positive and negative. Rightly so, they are interesting cards.

Two points to get everyone on the same page: (1) The Myriad keyword means that we may purchase all three for two experience points, but we don't have to: we can choose the one or the two we want the most. (2) The ability (+2 to a skill) is separate from the constant ability (ignore a substitution), can be used independently of it, and much of these cards' value comes from that option.

Let's be precise about the cost of getting all three into play: three cards, three actions, nine resources, and an arcane slot. To merely call that costly is to gloss over just how expensive the triple is — we need to ask ourselves: what else could we accomplish with three other cards, three actions, nine resources, and our arcane slot? Needing to search for these cards (with Lucid Dreaming for instance) adds to their effective cost. Uncage the Soul helps, but it doesn't make the issue go away: Uncage is one of several economy cards we can choose to include at the expense of other useful cards, and Mystics often already use Uncage with no shortage of targets.

Obviously, if we only plan on getting two copies or one copy into play, the cost is more manageable.

Empower Self, as a level two, once-per-turn skill booster, is worth comparing to the Carcosa cycle of talents: Well Prepared, Quick Study, Cornered, High Roller, and most significantly, Recall the Future.

Let's compare one copy of Empower Self to one Recall the future. Empower provides a bigger effective skill boost (that is, has a larger effect on our odds of success) to one test a round than Recall, but Recall is a resource cheaper and is slotless. Recall can also be used for any skill and often doesn't exhaust — we can pose the question: "Throughout an entire round, which asset is more likely to turn a failure into a success?" and Empower's only advantage seems to vanish.

Let's now compare two or three copies of Empower Self to two copies of Recall the Future. Triggering both Recalls provides an effective skill boost that is close to, and in some cases identical to, a true +2. Recall is still more flexible and Empower can never be used for .

While two copies of Recall costs four experience to Empower's two, I think the difference is stark enough make the comparison worthwhile: for the sake of skill boosting, I would rather have two Recalls in play than all three Empowers. This is without even considering that the former only costs us two actions, two cards, four resources.

Empower Self is only worth taking if we can also get value out of its other ability.

There are three issues to overcome to make this effect useful:

(1) Much of the value of spells is in their substitution to begin with — Rite of Seeking compares very unfavorably to Fingerprint Kit as does Shrivelling to the .32 Colt. Sixth Sense, substitution aside, provides a marginal benefit which would be hard to justify. This issue is worse with higher level spells as the + they grant is worthless if we aren't using .

(2) Using for investigation spells or for combat spells is a build-around type of effect, but we are only allowed one copy of the relevant Empower Self. If we, for example, build a deck that focuses on boosting at the expense of but include Rite and Sixth Sense, then those cards are not useful until we find our single copy of Empower Self: Acuity — and if we have a deck that boosts both skills then we don't need Acuity at all.

One perk of the effect is that it allows us to use cards like Deduction or Vicious Blow with spells, but similarly, those skills need to be useful without Empower Self to be worth including in the deck.

(3) Empower wants to be used with spells, but competes with spells for arcane slots. Being able to use for Rite and for Shrivelling isn't much help if we can only have one of those spells out. Sign Magick addresses this issue but has its own cost.

The strongest spell events that use don't substitute it, they add it: Read the Signs, Spectral Razor, and Ethereal Form; though Storm of Spirits and Blinding Light do have their uses.

Marie Lambeau comes to mind because she has a compelling reason to use spells besides — her additional action. A thrifty Marie might take Magnifying Glasses for her hands and take Sixth Sense to capitalize on her ability. Sixth Sense is then useful without Acuity but gets better with it. And while Marie is spending two experience on Acuity, she can pick up Alacrity for free as a kind of mostly-superior Trench Coat.

Diana Stanley is another interesting case — she likes using because she can get it up to 5 or 6, but she can't necessarily depend on it so Empower Self could be helpful. Synergy with Well Prepared bares mentioning because each Empower has double icons of its corresponding skill. Diana has the option of using her ability on Empower if she's done with one of them — but only after it actually ignores a substitution.

Spritz · 66
I still think Daisy is the natural home for this. Acuity buffs her primary stat and allows her to use Rite of Seeking as a pseudo Fingerprint Kit, which in turn frees up a hand slot for another tome. I actually published a rough deck along these lines yesterday. Even managed to find a use for Book of Shadows, which can be used for free by Daisy to keep her Rite of Seeking permanently stocked up with charges and grant action compression on every turn. Alacrity and Stamina are less useful but do offer some handy enemy management options that would otherwise require some pretty expensive and highly situational cards in the deck, so you can make a case for them. It also combos nicely with Essence of the Dream. With these assets in play Daisy can handle just about anything, at least for a while, and can pulverise any shroud level in the game. She also doesn't have the same opportunity cost with the arcane slots. It's a natural fit. Still may not be the optimal Daisy build of course, but I'm looking forward to try it out. — Sassenach · 166 2/11/20
That's fair — Daisy has excellent deck searching tools to find the Rite of Seeking/Acuity combo, and with 5 intellect she can make herself useful until then. — Spritz · 66 2/11/20
The other thing I'm thinking is that might be a signal that we're going to see Lily Chen in the next cycle. This is all highly speculative of course, but it seems likely that she would be some kind of Guardian with Mystic off class, and since the character is a martial artist there may be some kind of weapons restriction (no firearms for example). Something like this (a ritual that empowers her body and mind from within) seems like it would be a great thematic fit for this hypothetical investigator. — Sassenach · 166 2/12/20
Time has passed and Lily Chen has now been revealed. And she can buy Mystic cards level 0 only. A bit sad, really; Empower Self: Stamina would have a decent great way for her to fill an arcane slot for the Dragon Pole. But that was not to be. — olahren · 1995 8/7/21