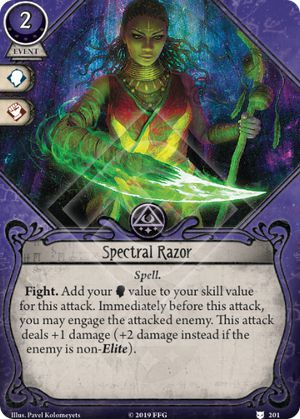 Spectral Razor is great and provides exciting flexibility for Mystics who want to handle combat but don't want to stack up charge-based assets. My favorite experience so far has been running a single copy in Father Mateo as a tidy little insurance policy for when the Serpents of Yig eventually show up. And I built a Patrice Hathaway deck for a friend that included two copies of the whole cycle (this + Read the Signs & Ethereal Form).

There two major rules points that are important to playing this card correctly, and which sent me frantically googling the first time my group tried to resolve one.

First: the consequences of "add your value." As other reviewers highlight, Spectral Razor is different from many previous cards because it adds rather than replaces the base skill being tested. The most obvious effect is that you're able to get big fight values very easily -- adding and can get you to totals of 6, 7, or 8 very often. But it also changes how you can further boost that skill value. Specifically, you can't boost this attack with pips on committed cards (like Guts), because according to the) rules for skill checks, players can only commit "cards with an appropriate skill icon" which are "[ones] one that matches the skill being tested, or a wild icon," and doesn't match Fights. However, you can boost your with many actions like those on Arcane Studies. The timing) rules of skill checks give windows before and after committing cards in step ST.2, and the final value isn't calculated until ST.5, when you "apply all active modifiers" to the base skill...that's when you add your . And, as the FAQ to Lockpicks makes clear, there's nothing stopping you from boosting a skill other than the one technically being tested.

Second: interaction with Aloof. There seems to be significant disagreement about this in previous reviews, but as I read it, Spectral Razor can be used to attack and engage an unengaged Aloof enemy. The difference comes down to the difference between Fight, which is an Action Designator, and "attack" which describes a mechanical operation that is a part of the Fight Action, but can also be triggered in other ways (for instance, Enemies "attack" investigators without taking Fight Actions). In the rules) for Fight, it states: "An investigator may fight any enemy at his or her location..." and it is the specific) rules for Aloof that intercede: "An investigator cannot attack an aloof enemy while that enemy is not engaged with an investigator." The difference in wording between "fight" and "attack" in these two lines implies that one can trigger a Fight Action against an unengaged Aloof, but simply couldn't resolve the attack portion of the Fight Action. This is where Spectral Razor's wording comes into play, allowing the Fight Action to start and then engaging the enemy in question "immediately before" the rules would prevent the actual attack.

Rules questions aside, this card has over-performed for me, and is a great option for asset-averse builds!

mistakes · 33
Good review! Interesting insight on attack versus fight. It does seem strange that one cannot attack an aloof enemy, but one can fight them, and yet here we are. I like the card too. I think it's a very powerful one shot, especially because you're liking boosting your willpower as a mystic with stuff like holy rosary and whatnot so the check should be relatively easy. The obvious downside is that you only get a single cast and it's weaker against bosses. — LaRoix · 166 6/23/20
Seems super great for the upcoming Sister Mary who starts at 7 and may likely bring boosts for Combat, Willpower, or both. — Death by Chocolate · 421 6/23/20
It is a will and combat skill check so you can commit any card withnthose icons. It is like saying that you cannot boost agility while fighting with ornate bow. — Baker · 2 6/24/20
Also, you cannot attack an aloof enemy if you are not engaged with it even with this card. — Baker · 2 6/24/20
Sorry, I wrote it too fast. You are both right in your points. — Baker · 2 6/24/20
Yeah just to clarify- you cannot use combat icons to boost a Bow test. You cannot use will icons to boost a Soectral razor test as it is a fight test (however your modified will is added to it, so Rosary or David for example still apply). — StyxTBeuford · 2317 6/29/20
It is a *combat* test, there — StyxTBeuford · 2317 6/29/20
But I am sure you cannot commit cards like "Heroic rescue" or "Taunt" since they have a "fight" skill icon, and use their "will" icon as well. Same if they have a wild icon. — ChesterBlack · 394 7/29/20
You can commit them, but only their combat symbols matter. This is not a will test so the will from those cards wont be added, only your static will is (base + any modifiers) — StyxTBeuford · 2317 8/13/20
9

A combat version of Read the Signs, and I must say, I am quite stoked about this card. It's a problem solver. In mystics and other investigators that use their to do their fighting, Shrivelling charges are an important resource and you want to conserve them if at all possible. In those decks, this card is very powerful. It does 3 damage to non-elite enemies, and, as of this writing, this one shots more enemies than it doesn't. Also, the fact that Spectral Razor adds to rather than simply replacing leads to some very high number. Akachi Onyele attacks with a skill value of 8 using this card, and Jim Culver and Agnes Baker both swing in at a 7, and this is before any buffs from things like Holy Rosary or St. Hubert's Key.

The other benefit, that Spectral Razor automatically engages the enemy, is kinda niche, but it can be used to pull a boss monster off of one of your fellow investigators without using an action. At the very least, it makes sure you won't accidentally hit your friend in the face for 3 damage if you happen to pull the .

It is also missing the clause on a lot of mystic cards that makes something bad happen if you pull a special token.

As for its downsides, Spectral Razor is only single use and it costs resources to use. Mystic's economies often have a lot of demands placed on them, so trading one card for one kill might not be a wise investment.

The other investigator I was really hyped about using this card is was Zoey Samaras, because this is everything she wants. With her 4 and 4, Zoey would be attacking at 8 with this card. It does a bunch of damage, which is always good, and the free engage combined with Zoey's passive would give me back one of the resources I used to play this card. The only downside (and it's a big one) is that Zoey only has 5 out-of-class slots, and in faction cards do most of this quite well.

Schielman · 14
You seem to confus your stats in the first paragraph. — trazoM · 7 1/13/20
Great review! If I might add something, it's that Spectral Razor and Read the Signs are great options especially at low level and makes Mystic completely functional for solo — mogwen · 203 1/13/20
Sefina also loves this card, as unlike actual mystics, she’s unable to pick up Shards of the Void, making her all the more dependent on Shrivelling. Plus, she can copy it with The Painted World. — Greatsageishere · 139 1/17/20
@trazoM, Fixed, yes I did. @Greatsageishere, you're right, Sephina likes this card. I initially wasn't thinking of here because she is only, only attacking with a 6 using this, but when it compares favorably to Backstab against non-elite enemies, I changed my mind. — Schielman · 14 1/20/20
Doesn't it also allow the attack of aloof characters without an extra action for engage? — Pixelated · 1 4/21/20
4

Workhorse event. Pretty good in a large variety of decks.

First off, a singular 3 damage attack with high hit chance is perfectly presentable by itself. People play Backstab fairly regularly and Spectral Razor sure as hell blows that old thing out of the water in terms of price and hit chance. Most characters can mount a +7 or +8 bonus without any support from other cards, which is enough to net hits on medium and hard with relative ease, Backstab in comparison requires some skill card committal or other forms of boosting to land a secure hit.

The ability to blow away a 3-health foe completely free of any support from other cards is perfectly worth a card. It's frankly super impressive at 2 cost and 0 xp.

You can build a deck with 2 Shrivellings and 2 Spectral Razors and use the Razor to cover yourself while you wait to find or play a Shrivelling, alternatively you can play it with Wither and finish off a foe you've started working on. If you have all 3 cards in a deck you've got yourself a very powerful, and dependable, combat focused battle-mystic!

The free engagement is the cherry on top, pull an enemy off of a friend before striking (removing the friendly fire risk) or engage an aloof enemy who'dd otherwise cost you an extra action! Luke Robinson has confusing rules but this probably lets him teleport enemies around!

Obviously the card is uniquely useful in campaigns where 3-health foes are more common, Forgotten age and Circle Undone have these in abundance.

It's good to see more events that are good without heavy support or combo mechanics.

Tsuruki23 · 1195
I don’t think this lets Luke teleport an enemy because (per his ability) he is already treated as ‘engaged with each enemy’ while resolving the effect. Spectral Razor allowing him to engage the enemy doesn’t necessarily cause a change in game state. Even if It did engage, it isn’t clear it would teleport since (per the rules reference) moves with an investigator when they ‘move’ - which Luke isn’t when he resumes being where he was. This does also bring up the question: what happens when Luke uses his ability while engaged where he was - does he provoke from engaged enemies (probably?) and what location are they treated as being at during his event? — Death by Chocolate · 421 1/21/20
I think this card is rock solid, too. That +2 damage to non-elites is key. This is probably a card you'll need to cut to make way for XP cards eventually, but I think it's a respectable early-to-mid campaign option. — CaiusDrewart · 1847 1/21/20
This + Dayana + Luke is pretty good — Django · 2799 1/21/20
Are you sure you can engage an aloof enemy ? IMO you can't attack it in the first place so you can't play this card on an aloof, not engaged enemy. — Fulanor · 1 2/3/20
You engage it immediately before the attack. It works. — StyxTBeuford · 2317 2/11/20
I’m inclined to agree Fulanor, aloof enemies that aren’t engaged are not legal targets of the Fight action. — FractalMind · 22 3/1/20
I would think that this cannot work against Aloofs, because you don't have a legal target to Fight, regardless what the text of the card says. However Marksmanship seems to set an uncomfortable precedent for this, and since that card obviously brakes the RAW, then this one might be doing it too. — ratnip · 18 3/1/20
Marksmanship clearly states it works on aloof enemies, this card sadly can't Target aloof enemies in the first place so it's no good. — Vultureneck · 2 3/6/20
'An investigator may use the engage action or a card ability to engage an aloof enemy." People have some truly odd interpretations of cards in this game. — jergood · 1 3/7/20
For Like specifically it seems to be moot as his ability itself engages. Still unclear to my brain if this works by itself on an aloof enemy because even though it says "engage before", fight does seem like an illegal target initially...and we didn't get an errata for this in 1.7 — BeCurieUs · 17 3/17/20