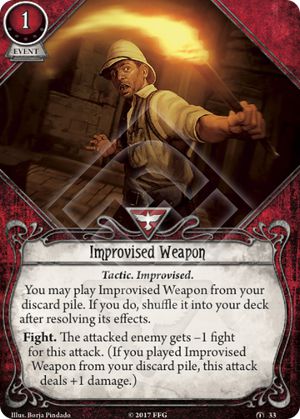 I was trying to come up with a use for this card, and I'm got to say I'm pretty much stumped. Maybe I'm missing something. But given that this card cannot stack with a weapon, it doesn't seem good for much.

About the only use I found is that this card is good against Rats (since reducing the test difficulty to 0 means almost a guaranteed success.) Solo Wendy can actually find Rats pretty irritating on high levels, so maybe there. Rats are generally not a card I worry about countering when I'm designing a deck, though.

For most investigators, there's the risk that Improvised Weapon gets stuck in your hand as a really weak event (attacking for 1 damage is not very good) that has no skill icons. That's not great.

For all the investigators with high Fight and access to Improvised Weapon, like Mark or Yorick, this card seems clearly inferior to simply fighting with a weapon, and therefore not really worth the deck space.

Wendy and Pete, of course, can fodder off Improvised Weapon to their special abilities and then play the more powerful version from their discard pile. Which sounds great... except that they have 1 and 2 base Combat. They can't hit with this at all, not unless they're playing an Easy or they're attacking a 1-Fight monster. And there are just not enough of those to justify this card, I think.

However, I think this could be interesting in the future if we get more effects that can reduce monster Fight and stack with this. Quasi-guaranteed successes against 2 or 3 Fight monsters would be really useful.

CaiusDrewart · 2230
Conglomeration of Spheres — InnsmouthLook · 12 7/2/18
This is terrible against Conglomeration of Spheres. 2 resources and two actions to do half its health and then be reduced to punching it anyway... — The_Wall · 223 7/2/18
Attacking repeatedly for 1 damage isn't good, but there are a lot of odd-health bad guys that you don't mind attacking once for 1-damage. If you're fighting a 3-hp enemy, this card looks a lot like a fast machete. — Sechen · 51 8/1/18
Twice in this review having a monster with 1 fight is implied to be some special cutoff. Unless I'm mistaken, nothing in the rules stops an investigator's modified skill value from being negative. If Wendy used this on rats and drew a -2, I believe she would still lose. (It being a -1 to the difficulty rather than a +1 to the skill only makes a difference for things like Against All Odds.) — jj10dman · 1 8/16/18
Disregard, found it under "Modifiers", page 15. Sadly I can't delete comments. — jj10dman · 1 8/16/18
Very disappointed this doesn't have a wild skill icon at the very least. However, like you said, this could be very interesting in the future. I expect a 2-3 XP version of this turning it into a Flashlight for combat (enemy gets -2 fight) and aforementioned wild icon(s). — ArkhamArkhanist · 4 9/1/18
I can actully see it being played by Pete against Conglomeration of Spheres. 1. Use duke for +3 mod +1 dmg. 2. Discard IW, ready Duke, use him again. 3. Use IW for autosuccess kill. The main drawback of this plan is 1 res cost of IW so it doesn’t stack with Dark Horse. — trbvm · 1 1/17/19
Here's a question, since this doesn't have the <span class="icon-action"></span> icon, does that mean that it doesn't take an action to use? That is to say, can it be used with another weapon card, or dare I say, Duke, — AbsolutZer0 · 15 9/10/19
You could play Anatomical Diagrams for -2 then attack with this for an additional -1. Not sure it would be worth the deck space, but bringing a 3 fight enemy down to 0 seems decent. Also these days there's Cornered to discard it. — Zinjanthropus · 155 5/31/20
11

Having played around with Improvised Weapon my conclusion is it fits the slot of a versatile back-up weapon.

When building for an investigator that can take Improvised Weapon it is never going to compete for the main weapon slot. There is still the need however for an alternative means of combat to hand in case you haven't drawn the main weapon, or you happen to be out of ammo/charges, or just want save ammo for the last swing. If combat is a focus, just including 4 weapons (two main, two backup) in a deck is not necessarily ideal but the temptation can be to include more weapons, which of course can reduce the flexibility of the deck.

In considering this back-up slot, something that may not be immediately obvious at first pass is the recursion potential of Improvised Weapon. After use from the discard it returns to your deck, which depending on the class will almost always be getting smaller. This means that although it only takes up one to two slots in deck construction, Improvised Weapon is effectively going to count as more copies of itself each time it is shuffled back into the deck. Even if this happens just once or twice a game your effective deck size is increasing by that amount, or to see it slightly differently, you have the potential to have more than two copies of Improvised Weapon in your deck without altering your deck size restriction.

This feature has pros and cons. By making your deck bigger the more you use Improvised Weapon, the less likely you are to draw another card you might need. However if you are using it you probably want to be seeing combat options sooner rather than later. Plus if you don't use it, well it just sits in your hand or discard until you do.

The second feature that makes Improvised Weapon shine is being an event that results in a fight action. This means no attacks of opportunity whenever it is used, no playing to the table that allows loss from asset-hate or competition with hand slots. It even resists deck milling by the mythos (which in turn makes it more effective!). In terms of straight damage it is very close to a knife that is discarded on the second action, but one that is fast, can be played from a discard pile and you can have more than two in your deck.

A brief mention also should be mentioned with regards to the -1 enemy fight value. As with shroud reduction verses investigation boost, reducing an enemy fight value is slightly better than boosting fight, even though the benefit is felt more with lower level fight tests. At present this is the only fight option that does this directly, Anatomical Diagrams being the only player card at present which does reduce fight but unfortunately without the fight action included.

The other points and considerations from previous reviews above are still very valid. While Improvised Weapon is a versatile back up or filler weapon, it isn't going to take down any enemies of more than 3 health and 3 fight easily on its own. In the most favourable situation assuming one Improvised Weapon in hand and one in the discard, it could dish out 5 damage for 3 resource and 3 action cost with 3 successful combat checks. Not perfect but it could save the day...

That said, Investigators that can take this and want to fight often may want rethink ignoring this card, especially early in a campaign. It can be useful for that odd ping of 1-2 damage in high combat investigators to save ammo and even in low combat investigators to give them at least something to fight back with. There will be better options later on, especially when classes are able to tutor for their main weapons, but even in late in a campaign, and depending on the scenario, being played from the discard can be clutch, while being filtered back into the deck ensures more readily available combat options are not far away.

In summary, don't ignore the effectiveness, recursion and resilience of this card as a combat option when everything else is against you. It works well equally with or without Dark Horse and especially well with discard options such as Cornered or, "Ashcan" Pete and Wendy Adams abilities. While the optimum play may be on a 1 fight enemy with 2 health when played from the discard pile, this card has a lot more going for it, even without other cards to support it.

Considering the Survivor faction, in my opinion this card is a flavour and faction home run; and one that is competes soundly for the title of the ultimate back-up weapon!

(Yes Survival Knife is ace, but no true survivor is going to want to take attacks on the chin regularly!)

Ideally you want to always play this from your discard, at which point it is like a 1-shot revolver, (that also generated whatever value put it in the discard in the first place). Playing it from your hand is generally bad. So the card looks like goes pretty well with Wendy and Pete, both of whom have strong discard-for-value abilities. Except... Wendy and Pete don't want to be fighting with their base stats. (You can't use it with Duke).

So that leaves Yorrick, Calvin, Silas, Mark, Mihn, Agnes and the 5-splashers. Many of whom would quite interested in playing it from the discard, but don't have a reliable and valuable way of getting it there .

So at the moment, it's a bit of a "no mans card". If another card for Survivor comes out that provides a discard-for-value ability, then I can see this suddenly being very playable. (Or if more cards arrive to support combat options in Wendy/Pete, but this is less likely).

This card looks terrible, but after playing with it I'd say it's okay in its faction. It's a card that has a few possibilities.

1) You're fighting rats and this is in hand. You kill them without risk and set it up for a 2-damage attack later!

2) You have no weapon, you have this in hand, and you're fighting a 3-hp enemy. You can kill them in 2 hits!

3) You have a baseball bat, you have this in hand, and you're fighting an odd-hp enemy. Use this for that last hitpoint, getting it into the discard and not endangering your bat!

4) You have a baseball bat and you're fighting almost anything and this is in the discard. If your bat breaks, you have a 2-damage backup!

I never had a game where this just sat in hand in my baseball bat survivor. Somehow I always ended up in a situation where it was good. I think that this card may be like Taunt, in that it looks terrible but in practice is actually pretty good a couple times a game.

Sechen · 51
Well, one issue with points 2, 3, and 4 is that most Survivors have terrible base combat. How are Wendy and Pete supposed to hit anything with 2+ Fight (which is almost everything) with this card? — CaiusDrewart · 2230 8/2/18
Scrapper? But that's very expensive. — Django · 3177 8/2/18
Yorrick can use this from the discard pile while his Machete is turned off, after having it fed to Cornered... Sounds like a reason to put it in a Yorrick deck... — matt88 · 2046 8/5/18
I was using it in Calvin, who can get enough fight skill to fight, but doesn't have access to guardian weapons like yorick. It's probably pretty bad in Wendy or Pete. — Sechen · 51 8/11/18
I feel like the best use for this is in a Yorick Deck that is relying on Baseball Bat. When the bat is in the trash, you pull out the improvised weapon to get it back into play. This eliminates the need for Bandolier and another weapon. I'm not sure it's a good strat, and it definitely is going to need some good luck to pull off, but it feels sort of legit. I'ma build something around it and try it out in a full NotZ run-through. — crymoricus · 207 1/11/19