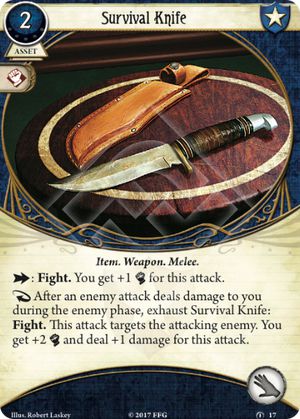 A very exciting card. This fills a long-time void in the Guardian class. Ever since the game was released, the best Guardian builds have revolved around Machete (excepting certain late-campaign, XP-intensive, two-handed weapon builds). But if Guardians have a Machete in one hand, what are they supposed to do with their other hand? They could hold another weapon like the .45 Automatic, but that's (mostly) redundant with Machete. They could hold some investigatory asset like Flashlight or (for Roland) Magnifying Glass, but for a multiplayer Guardian who just wants to blow stuff up, that's not a satisfying answer.

Dunwich and Carcosa provided our first two "off-hand" Guardian weapons with Blackjack and Trench Knife, respectively. Unfortunately, both of these cards are terrible. So for three whole campaigns, Guardians had no good options in the secondary weapon department.

But now, Survival Knife is here. And it's a wonderful complement to Machete. It provides a very powerful new ability and lets you do something Machete can't. A free +1 damage attack with a generous to-hit bonus is not to be underestimated. I'd say you only need to trigger the Knife a couple of times a game for it to justify its cost.

Survival Knife is also a good complement to the .32 Colt, if that's more your style. With this setup, the Knife will even be helpful in the player phase, because it's better than the Colt at dealing the last point of damage to odd-health enemies.

Whether Survival Knife can cut it as a primary weapon is another question. I kind of doubt it, as I think you will just struggle too much against enemies with 4+ health.

Survival Knife synergizes with other Guardian cards that encourage you to take attacks, e.g. Guard Dog. But I don't think such cards are needed for Survival Knife to be good. One problem with any Guardian build that plans on swallowing a bunch of attacks is that most enemies deal horror, and Guardians have no in-faction, cost-effective horror soak right now. Hopefully, the Guardians will get some help in that department sooner or later. That will make all these Guardian cards that revolve around taking attacks, Survival Knife included, that much better.

CaiusDrewart · 1534
Guardian allies are all pretty expensive, so you can't really use them as soaks. Elder Sign Amulet may work, though. Carolyn has a lot of sanity, so if you can boost her poor combat, this card would work nicely for her. — Django · 2116 5/15/18
@Django The knife specifically says damage, so it won't trigger off horror. In other words, it can't work with the Amulet. — SGPrometheus · 175 5/18/18
@SGPrometheus - Having said that, most enemies are dealing both damage AND horror in the same attack. So in a large number of cases, it's a moot point. — OuterCr0w · 1 6/15/18
3

I think I really like this knife, surprisingly. It's certainly no Machete, but it does allow one more attack in a round than the Machete, and that attack has unconditional +2 and +1 damage, which is slightly better. I suppose your best case is to dual-wield, chopper in one hand and knife in the other, only using the Knife for its ability when available. Might actually make the Bandolier more attractive, since you can activate two Knives and hold a machete, or even get an extra free attack even with a Lightning Gun equipped. Knife + Bandolier + Zapper gets you 11 damage in a single round with 3 actions and no other cards; kinda crazy (and assuming everything hits).

As for the obvious drawback, soaking an attack, it turns out that an enemy attack always deals you damage, even if you assign that damage to your assets. Put another way, an effect that deals your investigator damage is always considered to have dealt you damage, even if you assign that damage to something other than your investigator. At least, if I'm understanding "Dealing Damage/Horror" on p. 7 of the Rules Reference correctly. What this means is, if you have your trusty Pooch out and, during the enemy phase, a Swift Byakhee attacks you, you can assign the damage to your excellent dog, triggering his effect, and trigger your Knife, taking no damage yourself and killing a 3-Health baddie without using an action. Furthermore, damage mitigation for Guardians is already pretty massive, so even without damage-soaking assets out the ability is pretty worthwhile. Weirdly, it doesn't work against enemies that only apply Horror, which isn't great, but those enemies are pretty rare anyway.

The more I look at it, the more I like it; I'll have to try it next time I make a Guardian. Probably best with Mark, as it synergizes with his love of taking damage, or with any asset-heavy fighter, like Leo Anderson.

SGPrometheus · 175
I disagree about the Mark recommendation. Sans cards like True Grit (which mark loves, but doesn't see as much play with him as of right now) Mark's health pool is a precious resource that is granular. — Myriad · 650 5/11/18
I already love this for Leo. It may not be a universal Machete killer, but I think it's legitimately preferable for some. — CSerpent · 73 5/11/18
@myriad It's not Mark's health pool you'd be using; you can assign the damage to his allies, like Beat Cop, Guard Dog, Brother Xavier, whatever, and the knife will still trigger. — SGPrometheus · 175 5/11/18
I don't understand why you'd think of the Knife as an alternative to Machete. They complement each other and do different things well, and you can have them both out at the same time. However, if you only have one or the other, the answer is clearly going to be Machete for most Guardian builds. — CaiusDrewart · 1534 5/13/18
@caiusdrewart I'm not suggesting it's an alternative; the example i give literally suggests using them both. — SGPrometheus · 175 5/14/18
@SGPrometheus: Yes, sorry, I realize now my post unclear--I was trying to respond to CSerpent, not you :) — CaiusDrewart · 1534 5/14/18
Leo with 3-5 allies out will be able to soak A LOT of damage in a scenario. I think 2 x Survival Knives with Leo is pretty exciting. — Wyndam · 1 5/14/18
This + Yorick + Cherished Keepsake/Leather Coat = at least 1 free action on every kill. Toss in a Brother Javier, and some heals (Kerosene? Emergency Aid?) and I think this idea is going places! — crymoricus · 192 1/5/19
Awesome with #Heroic Rescue! — crymoricus · 192 1/10/19
1

Can I counterattack with this, then prevent the damage with Delay the Inevitable or Deny Existence? I think the answer is yes, because all 3 effects can be used in any order after the damage “is dealt” before the damage “is applied” according to the rules reference.

jmmeye3 · 209
I believe there's a clause somewhere in the RR about not being able to react to something if you cancel it. Still, the effects you mention only cancel certain parts of the attack, so you may be right. — SGPrometheus · 175 2/8/19
No. The cards you mention are all used *when* you are dealt damage, and survival knife triggers *after* the damage is dealt. Before -> when -> after — ArkhamDio · 448 2/8/19
I agree with Dio. I think there was a similar question about Armor of Ardennes in the official forum and Matt replied that prevented damage/horror does not count as dealt (that's not the same as healing it, btw). — Django · 2116 2/8/19
Yeah, I guess that's right. On reading the dealting damage section more closely, this is the critical part: — jmmeye3 · 209 2/8/19
"If no damage/horror is applied in this step, no damage/horror has been successfully dealt. Abilities that prevent, reduce, or reassign damage and/or horror that is being dealt are resolved between steps 1 [assigning damage] and 2 [applying damage]." — jmmeye3 · 209 2/8/19
Cancel mean it never happened to me. But ignore mean it happened. So Deny existence would be legit to combo but not the Delay the inevitable — AquaDrehz · 3 2/20/19
0

I was very excited for this card and despite all the positive reviews I have to express my disappointment. I was just doing one of Forgotten Age scenarios with my GF as Leo Anderson with 2x Machete 2x Survival Knife and one Prepared for the worst. My GF drew only Survival Knifes and of boy its so hard without a weapon that does double damage. Additionally, when the enemy attacks you only with horror you cant retaliate. Of course Prepared for the worst returned no Machete. So in general this knife is great if you can have it as a secondary weapon but if you dont draw the primary one it sucks badly. That means the deck would have to have at least 4 primary weapons (or 3 plus Prepared for the worst) plus two Survival knifes and thats a lot of cards so I ll be replacing this asap. Too bad.

Pgpgpg · 2
Did you run this with Guard Dog? It’s really strong as a defensive set up with Guard Dog. — StyxTBeuford · 610 9/30/19
I just want to know if your girlfriend experienced the joy of throwing the survival knife at an Eztli Guardian from a location away as an instant kill that doesn’t take an action in response to the poor chump trying to shoot her. I feel like the realization this knife does that to Eztli Guardians is what made me love it in TFA. — Holy Outlaw · 21 9/30/19
@StyxTBeuford yes we run it with two Guard Dogs in the deck. Actually one of them was in play when she drew the Brotherhood Cultist. This fella unfortunately deals only horror so suddenly you cant retaliate with the Knife and you cant react with the Guard Dog. It was dire. And the paradox is that if the Cultist gave 1 horror AND 1 damage he'd be easier to defeat for us. — Pgpgpg · 2 9/30/19
@Holy Outlaw I can imagine how great that combo might feel! Unfortunately somehow we didn't draw any Eztli Guardian till we parlayed with Ichtaca. — Pgpgpg · 2 9/30/19
Fair eniugh, Pgpgpg. It’s probably for the best since I can never quite square how I immediately kill an archer who fired an arrow from a mile away with that little knife as an instantaneous thing without the knife leaving my hand, but I always know I’m a pretty cool guy every time it works. ☺️ In all seriousness, I agree that a main weapon really needs a static and reliable damage boost and that the survival knife only shines as an offhand weapon, limiting its overall utility, since many guardians want an investigation tool in the offhand. — Holy Outlaw · 21 9/30/19
Yeah, while Survival Knife is a fine supplement to a good player phase weapon like Machete, it is a very poor substitute for one. That means it is not a good idea to run only 2 Survival Knives and 2 Machetes, even if you're running Prepared for the Worst, because the risk of not finding your Machete and therefore having a weak player phase is too great. (Since Prepared for the Worst only searches less than half of your deck, it won't find Machete reliably.) You'll want to run at least 4 other cards in your deck that can deal 2 damage per action. — CaiusDrewart · 1534 10/1/19
I played TFA with a Leo and packed 2x Machete, 2x .45, and 2x Survival Knife (no PftW). It was a great supplementary back-up weapon that I got a lot of use out of in the early campaign, but it’s not what you want as your first weapon play. — Death by Chocolate · 12 10/4/19