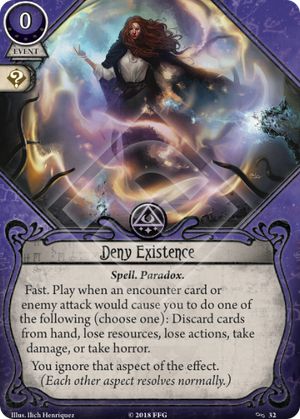 Ward of Protection is often considered one of the strongest events in the game, since cancelling a critical treachery can be game changing. Deny Existence is a similar card, that has narrower coverage, but does a better job for what it covers. Compared to Ward of Protection, this card cost 1 resource and 1 horror less to play, and more importantly, it can be played after you failed a test on a treachery.

Imagine you are Agnes Baker and has 3 sanity remaining. You draw Rotting Remains. Normally you would be happy since you can usually pass the test with ease, but since an auto-fail draw outright defeats you, you may consider using Ward of Protection to cancel it. However, if you have Deny Existence in your hand, you may instead take the chance. Most of the time you will pass the test, and if you auto-failed you just play the card to ignore it. In this aspect, Deny Existence to Ward of Protection is like what Lucky! is to Unexpected Courage, that it has an effect even if you do not play it. But the cost is also favorable to Deny Existence. This shows how insanely powerful is the card.

Additionally, Deny Existence can cancel certain weaknesses, since treachery weaknesses are considered encounter cards. Notably it ignores Amnesia and Paranoia in their entirety. This is another really strong ability. Interesting side note: The card can ignore the direct horror from To Fight the Black Wind, and potentially preventing the doom as well.

Being able to ignore enemy attacks is the icing on the cake. Most enemies deal both damage and horror though, so Deny Existence usually only ignore part of the attack.

Deny Existence is such an excellent card, that it is hard to imagine not putting it in every deck that can take it.

ak45 · 415
The only failing this card has compared to ward is that it cannot stop cards such as Ancient Evils; you can still lose the scenario with this in hand. That being said, I agree that this is a very strong card. — SGPrometheus · 688 2/2/19
I expect this to be errata'd to non-weaknes treachery pretty soon — Adny · 1 2/4/19
Would this prevent becoming poisoned from [Pit Viper](/card/04078) if you choose "ignore damage"? — panchar · 1 2/6/19
Also, I guess card hyperlinks don't work in comment replies? — panchar · 1 2/6/19
It would. If all damage is prevented than damage was not dealt. It actually that verbatim in the rule reference under Dealing Damage/Horror that if an attack's damage/horror is assigned as a result of an attack then damage/horror has not been successfully dealt — Donel · 13 2/11/19
that if no damage/horror is assigned* — Donel · 13 2/11/19
Additionally, It was confirmed that this DOES work with weakness cards as they are considered encounter cards. Even better, Matt ruled that this DOES ignore Diana's weakness, as her weakness specifies "Cancel" and this "Ignores". — RobSan770 · 2 2/11/19
If I read it right, this card can nullify the whole 10 damage from Beyond the Veil. — Killbray · 6127 3/17/19
Does anyone know if this could ignore horror from Dark Memory? I ask because it is an event, which is a player card type, so I don't think it counts as an encounter card, but I'm not sure. — Zinjanthropus · 212 7/19/20
No it can' ignore Dark Memory. Weakness is a trait it doesn't modify card type. — vidinufi · 57 7/17/22
6

The FAQ from this page is extremely relevant for this card:

"The act, agenda, locations, scenario reference card, locations, and all cards in the encounter deck are all considered encounter cards."

So you can use Deny Existence on all of those cards. A location makes you take damage or lose actions when you enter it? Ignore it! The Agenda flips and deals you a bunch of horror? Not a problem!

Spoilers for Innsmouth: You can even use this card to stop yourself from drowning. Why not take Dianna to The Pit of Despair and spend the whole scenario underwater?

This card is best with Diana, for whom (as long as you have an open spot beneath her) it replaces itself and gives +1 resource (same net bonus as Emergency Cache). It might be usable in some other decks, especially if you are trying to increase your spell count (for Arcane Initiate, etc). Awesome artwork, too!

jmmeye3 · 594
When using it with Diana, does this card stop Rites of Seeking from ending your turn? My gut feeling is no. It counters the "lose actions" part but the end turn line is an additional effect. Came up in a game last night but I think it'd still cause her to end her turn, she'd just do it with all her actions. — skanedog · 61 2/13/19
@skanedog Rite of Seeking is neither an encounter card nor an enemy attack, so Deny Existence doesn't even trigger. — TheNameWasTaken · 3 2/15/19
But ending your turn is also a different effect so it couldn't stop it even if it were an encounter card effect. — vidinufi · 57 7/17/22