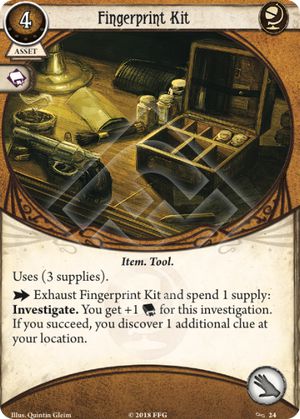 I'm not convinced by this card. While there's something nice about turning any main/off-class seeker into Rex for three actions, this card doesn't represent the best value IMO. Including the action to the play the card, this card generates the equivalent of two actions. It costs a whopping four resources to play and will leave the player 3 resources shorter than if they had Dr. Milan in play and investigated them the old fashioned way.

A magnifying glass costs 1 (or 0) resources, is fast and gives the same Int bonus while investigating. Further, Fingerprint Kit loses value and/or utility on 1-clue locations. The net result of playing this card vs not playing it is 4 resources for 2 clues. 3 resources if one played Magnifying Glass instead, 7 resources if you count the resources not gained from Dr. Milan. It doesn't help on 1 clue locations. I think if it cost less, had more charges, or could get more charges it might represent better value.

In fairness, the net two actions could be used to clear out a location in a single turn, otherwise not possible so there's something to be said for it, but it's so costly and not always guaranteed to be useful, unlike a magnifying glass and Dr. Milan. I think adding more charges to it (Venturer, Emergency Cache (3)) will be a massive boon to this card (tho Venturer does itself cost 4 resources and an action to play and can only be used by main/off-class blues).

KingsGambit · 6
The cost does seem a little high. I think it does require ways of adding supplies to be worthwhile (either E-Cache 3, Venturer or Contraband/Contraband 2). It can also do pretty decent work if you have it in a deck with act of desperation to recoup the cost. But outside of those instances it struggles against a Flashlight. It will kill a lot of tempo to play and while most Seekers have gotten an economy book in Crack the Case, it still has some issues. — Myriad · 703 4/10/19
Don’t forget about any resources or cards you might pitch on a high shroud location that you save making one check instead of two. This card reads: Pay four resources and a card to draw three copies of Deduction. It’s pricy but effective - more so with E-Cache3. — Death by Chocolate · 13 4/10/19
In a Minh deck with Milan, Drawing Thin and Scavenging, the finger pring kit is a killer! — mogwen · 147 4/13/19
I like it a lot for Norman, who is highly skilled at getting clues, but slow. — jd9000 · 35 4/22/19
The cost is proportionate to the amount of clues that it lets you grab. A Flashlight costs 2 resources and let's you grab 3 clues. This card costs 4 resources and let's you grab 6 clues. Of course Flashlight gives you a higher chance of getting clues than this card does, but you'd need to play 2 Flashlights and therefore spend 4 additional actions to get the same clue gain. As a result this card is clearly meant for investigators with a very high Intellect value that benefit more from compresing their already excellent investigations than further improve them. In other words Daisy and Norman and those who want this. BTW I don't think the comparison with Rex is appropriate. Rex needs to surpass the skill test by 2 points, you just need to pass the skill test with this card. The major downside is that you can only use it once per round under normal conditions. — Killbray · 52 5/25/19
2

A ".45 Automatic for investigation and an interesting way to "nerf" the strongest in the game.

For 4 resources and 4 actions you pick up 6 clues with a +1 bonus. Use it alongside Magnifying glass or instead of it, the compressed number of tests lends extra usefulness to Perception and Unexpected Courage and other cards with intellect icons, also large bonuses like from Fieldwork become that much more impressive. An Ursula Downs with Fieldwork and Fingerprint Kit can blast locations at 7 for double clues, 8 with Milan in play, high difficulty investigate locations aren't too common so a Eureka! would stop the gap just as well as the good doctor would.

Rex Murphy has been the strongest for a while, but giving accessible multi-clue to everyone in the class all of a sudden frees up a lot of space for fresh blood in the spotlight. Ursula Downs can trigger it on her ability, Daisy's long setups are mitigated by the added clue speed. Finn Edwards and Carolyn Fern can also make use of it. Resupply with Venturer or Emergency Cache, yeah, there's a lot of options there.

To say the least, this card is going to shift the way characters are built. Or not. Less investigations means less money from Dr. Milan Christopher. There's an anti-synergy here. I figure there will be new and divergent build paths.

Edit: A little more experience playing with it.

Fingerprint Kit is not a catch-all good clue-getter card. it is very expensive for what it does. The specific deck-tech this thing is for is to speed up a character who is doing little else, and has cash to spare. Ursula Downs or Daisy Walker, Norman Withers, characters whose actions are predominantly used to beat the clue part of a scenario. If you've ever seen these types of characters at work you've probably seen them sporting piles of 10+ resources doing nothing at the end of a scenario, this card is for them.

For a character whose role is multifaceted, such as Roland Banks or Joe Diamond, fingerprint kit falls off the radar, it's just too expensive a card for characters who need to be paying for weapons and Physical Training usage as well. For these guys there's cards like Pathfinder or Magnifying Glass, cards that are cheap enough to play in between guns or will be generating action value whether you're killing enemies or getting clues.

Tsuruki23 · 1024
I think this card will be amazing with the spoiled Mr Rook from the wages of sin and unearth the ancients, because this is the higher costed seeker asset by now tied to milan, and if you had milan, you had no more money problems already. As for Mr rook, he is not that cheep neither and can get you cards to pass this 4 difficulty intellect test — aurchen · 1 2/3/19
Can you intiate an investigate action with the last supplie in the kit with the hawk-eye camera on the other hand, to play the mag-glass(1) in the player oportunity window and discard the kit before to draw a chaos token to get the +1 from Mag-glass and+1 +extra clue from the kit??? — toriano · 2 8/25/19
-(from rules) A fast asset may be played by an investigator during any player window on his or her turn. — toriano · 2 8/25/19