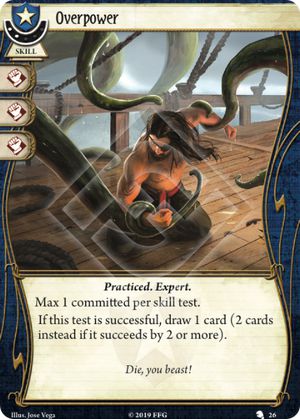 Am I the only one who pissed off because Silas cannot use this card?

I am not sold on this suite of cards, but others seem to love them, so let's discuss why. Three icons is a great boost, for one. 1-2 card draw is nice in Guardian, whose decks tend to be slow (Tommy, I am looking at you). Although, to be fair, spending 2 XP on a card with a chance of drawing two cards by overblowing a test seems... inefficient? 2 XP will get you Vicious Blow (2), which trades an icon and card draw for extra damage, or Leadership (2), if you prefer janky buffing of your fellow investigators. Don't tell me you love this card because of Practice Makes Perfect; all three level-2 Guardian skills are Practiced! Of course, Overpower (2) helps you land Vicious Blow (2) for bonus damage and cards, so, maybe if you have the XP, buy them all?

LivefromBenefitSt · 937
To be honest I do love this card because of Practice Makes Perfect. Think about it: you PMP to draw this, commit it, succeed by 2, then draw 2 cards PLUS you draw this to commit to the next fight test. From PMP you manage to boost 2 fight tests by 3 each, and if you didnt need most of the boost, you draw up to 4 more cards. Now pretend you’re Joe Diamond and you also have Perception 2 for the same reason (run alongside Deduction, Vicious Blow, and maybe Take the Initiative to ensure you hit your targets). Or maybe you’re Mark Harrigan who can either PMP into this or The Home Front, either way a huge boost. The Practice trait matters a lot here. It will also matter a lot for Amanda Sharpe. — StyxTBeuford · 12744 9/16/20
I agree that the Practice Makes Perfect is a huge selling point, although I wouldn't count on it unless you do have a couple other Practiced Skills because PMP only searches I think 9 cards, is it? Overpower is particularly good for a Shotgun build where every skill icon could potentially be damage. The 2xp might feel a little steep, but it is a boon for any sub-class gators. — LaRoix · 1608 9/17/20
I've typically done PMP searches with somewhere around 4-6 potential targets per test- the 10 skills I take with Joe for example only have 6 valid targets as some are for investigates and some are for fights. 6 seems to work fine. For Mark Harrigan you could take Overpower, Vicious Blow, Take the Initiative, and then you also have The Home Front. A solid 7. So yeah, if you're running a PMP build you definitely have to lean into more than just Overpower, but Overpower is still a really good target in that build. — StyxTBeuford · 12744 9/17/20
The thing with fighting is that it’s usually time sensitive. Committing to a test so that all non-af tokens pass may often be worth it. For this reason a card which both gives you an excess of icons, and turns a succeed but two into a small refund is actually quite good. — Difrakt · 1180 9/17/20
Another point towards PMP is that, sure Leadership is Practiced too, but you don’t just want Practiced skills for PMP - you want consistency in the Practiced skills you run to fill a similar roll - i.e. strong investigation boosters or strong combat boosters. Overpower pairs well with Vicious Blow (and The Home Front) for consistent, thick, combat boosts. — Death by Chocolate · 1251 9/17/20
1

I can only imagine the 'Innate' trait was not on this card to specifically not allow it to go in a Silas deck, because the other similar upgrades over the neutral basics, of Guts, Manual Dexterity, and Perception are all innate. It annoys me more for the asymmetry that the other 3 are innate.

Rolandironfist · 3
You're working from a misconception there. Perception isn't innate either, and all four keep their original trait when upgraded. The innate ones also add Developed, and the practiced ones add Expert. — TheNameWasTaken · 3 10/14/22
What TNWT says. Plus, there is not a single card, that has Innate AND Practiced as traits. They are treated as the opposite of each other. (Though there are a lot of cards, that are Blessed and Cursed, so it might be, that there will be one time a card, that carries both.) — Susumu · 271 10/15/22