Spend up to 3 resources and exhaust Green Man Medallion: Place those resources on it, as offerings.

When you resign or the game ends: For every 6 offerings on Green Man Medallion, reduce the experience cost of the next card you purchase before the next scenario by 1.

David Griffith
Hour of the Huntress #2. 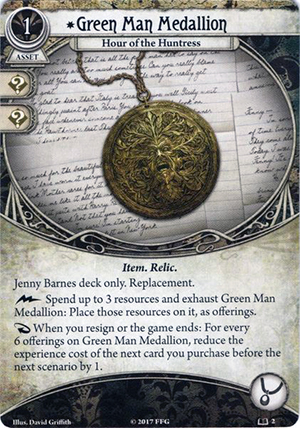 Jenny likes spending XP (who doesn't?), and she is good at generating resources, so there is a good chance that she will pick up a decent "discount" every scenario where this gets played. Since it's a discount on one card as opposed to bonus XP, you will want to have a good idea of what you are intending to buy and, therefore, the maximum resources you want to stack on this in any given scenario. It does eat up a lot of resources, but Jenny is primed to provide them, and it's a fast action to charge the medallion, which makes it more playable. While Jenny's other signature asset takes up both coveted hand slots, it's not like doesn't have some good accessories. Additionally, if you are a gambler, Charon's Obol is probably a more efficient way to do much the same thing as the medallion, although there is no reason you can't run both for some ridiculous XP purchases.

Asset-wise, the two sets are pretty similar, while the "box" signature weakness is worse. Players who like Jenny might get the novel and try out the "book" set for a bit of relief. No one will want to play both, I think.