Spawn - Location farthest from you. 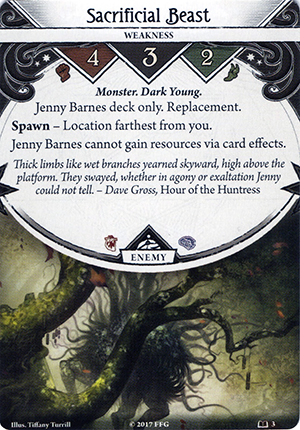 While less horrible than Jenny's other signature weakness, this beast is no picnic. In some maps it will be a bother, in others it will ruin your day for much of the scenario. It can be handled by other investigators, which is a plus, and it's not much of a challenge for your average Guardian (or even Miss Barnes under most circumstances). Unlike Searching for Izzie, if you draw this in your last few turns, it probably isn't much of a problem. You might also use various tricks to get close to it (maybe Elusive) or to get it closer to you ("Get over here!"), although the latter means using up 1-2 of Jenny's precocious "free" spots in her deck for only a minor benefit. Overall, this is a less bad weakness paired with a signature asset which is about as good as the Twin .45s, so players might well prefer this.

Both assets can be replaced with faction cards and are merely good, not fantastic, while both weaknesses are pretty bad, with the Beast being slightly easier (especially in solo), so players might well chose the "book" set over the "box" set, and I doubt anyone will want to take both.

This card really screws you over more often than not. Green Man Medallion is great, but Sacrificial Beast often spawned in a locked location, essentially blanking Jenny and Lone Wolf for entire scenarios for me.