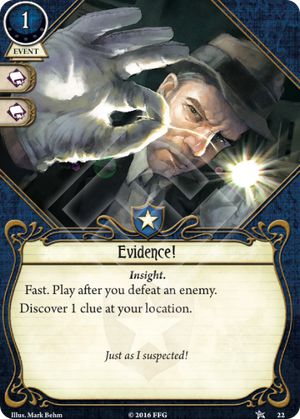 A classic card by now. Evidence is the premiere "Turn your into clues" card. it's been a while since core however and there's some competition out there now, so lets have a fresh look:

Evidence! grants a clue for killing an enemy, this can be a tricky circumstance to set-up since there will not always be a clue at your location when you kill something, but it's still common enough. The net benefit of this card is one saved action to investigate, and an "automatic" success that does not depend on a skill check (other than killing the bad guy!). For this you pay 1 card and 1 resource.

The optimal way to play this card is by prioritizing where you end your rounds, if you can end rounds on locations with clues you can hope for an enemy spawn on you (or force it with On the Hunt). Note that this playstyle synergizes with Shortcut and Narrow Escape, where you can move the enemy to where you want to kill them. You can still do this and just suffer the attack, but these cards turn a desperate play into a value one.

Other cards that that do a similar job are: Working a Hunch, does the same thing, with the same icons, condition-free but 1 more expensive resource wise. Scene of the Crime, costs an action and requires an opponent, but grabs 2 clues. Drawn to the Flame, condition-less and double the clues at the cost of an action and extra risk. Eavesdrop, a tricky card to pull off that costs multiple actions, can net you a drastic reduction in difficulty compared to investigating a high-shroud location, test reliant. "Look what I found!" costs an action and an extra resource, but nets an extra clue, test reliant. Evidence! competes with these cards for slots in a deck.

"Test-less" effects are good, test-less clues are good, but all of these effects will cost you cards and resources. Not to mention that the benefit sways with player count and difficulty. There's also the unique characters to keep in mind.

Roland Banks single player has little use for Evidence!, most locations have just 1 clue and he can cover that with his innate ability. He can take Evidence! for double-clue locations but Working a Hunch can cover those and free's you from having to kill things first. It's way better in 2+-player where near every location has 2+ clues and he can complete those in just 1 killed foe.

Zoey Samaras, Leo Anderson and Mark Harrigan can have difficulty getting clues, Evidence! is obviously good for them solo. In multiplayer however you might be better served leaning on your friends for clue gathering and going full-. They benefit greatly from Scene of the Crime however and Zoey Samaras can grab Rite of Seeking and/or Drawn to the Flame to truly break her -only mold.

"Skids" O'Toole and William Yorick can pull some tools from their respective factions to net clues, An evasive "Skids" O'Toole might not want Evidence! but if you build them as fighters then both can put Evidence! to use. Fighters or not Scene of the Crime is great on them in multiplayer, arguably better then Evidence!. The icons are especially useless to William Yorick.

Evidence! is a terrible card for Carolyn Fern, she can just use her to complete most locations and Scene of the Crime for clue-tempo.

Final verdict: Evidence! is a decent card, generally worth a slot for investigators whose is high enough to put the icons to use, but too high an score makes this card redundant, the golden number here is >3<. It's great on multiplayer Roland Banks but generally less useful then Scene of the Crime on other investigators (in multiplayer). It's very useful on any focused character who can bring it in solo.

One full expansion in, Evidence! remains one of the strongest level 0 Guardian cards. One card and one resource for one clue is a very strong trade that will speed up your progress considerably. The event is pretty easy to trigger, as most locations in Arkham Horror have clues on them, and it is a rare scenario indeed in which the Guardian isn't killing a few monsters. It is sometimes worth it to take an attack of opportunity to move with a monster to the right location (or, better yet, use Shortcut), but most of the time you can trigger Evidence! without any such hassle. If for some reason the monsters aren't showing up, the two Intellect icons on this card are also useful.

I usually include this card as all three Guardians. Zoey and Skids, otherwise desperately short of clue-gathering options, are very grateful to have an efficient one like this in-class. I think Evidence! is particularly strong for Roland; his plan of attack was already to kill monsters on spaces with clues, and Evidence! rewards this further. Clearing a high-shroud, two-clue location merely by killing a monster (something you probably would have had to do regardless of the clues) is excellent.