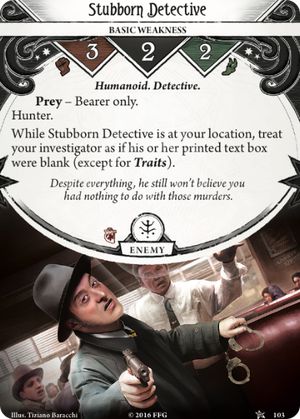 This isn't so much a review as a short thought about the battle between the literal and metaphorical in the player cards of AH:LCG. So, what do I mean?

Ok, you draw and play a Research Librarian... depending on the setting it's quite believable that you may have stumbled upon him at Miskatonic University and he just so happened to have "that book that you asked for". It's also believable (though less likely) that the same kindly librarian happens to be on the Essex County Express at the same time as you... and he has yet another antique tome with your name on it (what a guy). Equally, we can explain away the bevy of other allies who make appearances in unlikely places as abstraction, rather than a solid physical presence, e.g. we tell ourselves that Madame Labranche hasn't literally just appeared from around the corner in the Eztli ruins of southern Mexico ("Oh, hi there!"), we're merely remembering her advice and her generosity and how it led us to prepare our resources and assets in advance.

... all of which is a long way to say that the thematic possibilities of the Stubborn Detective have made me giggle on numerous occasions. On the one hand he turned up in the Clover Club. Makes sense. On the other hand he literally pursued me to the edge of the universe. Someone give that man a promotion. Really first class police work. Still... he's going to look pretty silly when he tries to get me back to the station for processing. And, no, I really didn't have anything to do with those murders.

mythosmeeple · 366
We’ve endearingly named our stubborn detective Charlie. He chased us to the edge for the universe too and got trapped there with Jenny when things went south. At least he finally caught her, and perhaps one day, when the stars align, he will return. — Death by Chocolate · 979 10/30/18
I feel that Charlie needs his own Netflix show. — mythosmeeple · 366 10/31/18
10

I like this card (as much as anyone can "like" a weakness card). It's got a really interesting theme, but at 3 Fight and 2 Health it is more of an annoyance than a serious danger.

Some investigators rely more on their text box traits than others. Here are a few unusual interactions:

That's just as of The Circle Undone - I am sure there will be more unusual cases going forward as more investigators get added.

Does this card blank out the portion of the text box well? I would think the answer would be yes. If that's the case, what happens when you draw that token? My assumption would be that it would be a 0 in most cases (barring the presence of the The Necronomicon). I don't know if there's an official ruling on it, though.

Anyways, this card pretty cool - that detective must be pretty stubborn to follow the investigators so diligently!

ArkhamInvestigator · 265
He definitely blanks out the elder sign part of any investigator; it's in their text box! And I would agree that such a draw would result in no modification to the skill being tested. The funniest thing is when he somehow shows up in a different dimension or a different time. Maybe he's more than he seems... — SGPrometheus · 594 3/3/19
Joe Diamond can no longer use his Hunch deck. — CSerpent · 106 7/20/19
I feel like if Lola got this weakness, she should just try her best to keep evading him. Think of the jank that could enable! Better yet, adapt in Handcuffs so that you can just keep him perma-evaded for the entire game. If you need to move, just engage him first! — Zinjanthropus · 185 5/17/20
I think with Calvin Wright it is a bit of an issue. I could imagine it just simply not being fun to play that combo, especially single player. Even if you manage to evade with something like the Stray cat, you'd have nearly no way of doing damage to him. You'd end up with a deck heavily designed to help you deal with the detective. — Phoenixbadger · 169 12/7/20
5

The following is a Question, not a review.

In our 2 player carcosa campaign, this card is part of Lola Hayes deck. If this guy is at Lola Hayess location, does this remove her restriction to only play cards from her current role? After reading related rules it seems yes, but i'd like some other opinions about that.