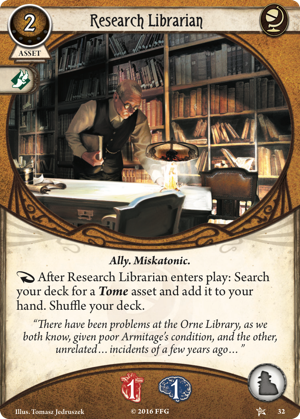 For most card players, getting the ability to search your deck for something and putting it into your hand is pretty awesome. For some CCGs, cards that do just that are more expensive just because they do that. It's a fantastic advantage to have.

But this isn't a CCG, it's Arkham Horror LCG.

So he should be an auto-include for someone like Daisy Walker, right? ...Eh, kinda.

Research Librarian's greatest strength is also his downfall. Should you happen to draw your tomes before him, he just becomes a very flimsy 1 health/1 sanity shield, which, for 2 resources, is not very efficient. He also takes up the ally slot, which could be better used to fit whatever you're building toward.

His only usefulness is, like I said, on action 1 of turn 1 to search for your tome. After that, feed him to Forbidden Knowledge or shield some of that Dynamite Blast you had to use. Otherwise, keep him in your hand for that agility test. He's a one off at best, at least in my opinion.

LikeaSsur · 33
So Roland Banks actually used a poor research librarian as a human shield to save himself from a dynamite blast he set off himself? Damn.... Guess I know now how "cover up" became his signature weakness ;-) — Heyenzzz · 2263 12/1/16
One-off, absolutely - but do one or two of these mean you don't have to have second copies of valuable tomes? That could be quite appealing. — AndyB · 391 12/2/16
I could see the appeal in using these instead of having multiple tomes (especially for Encyclopedia and other XP tomes to be released). That's not something I considered, thanks! — LikeaSsur · 33 12/3/16
I don't find your argument very compelling. Research librarian only gets bad if you've drawn ALL the tomes in your deck (you don't put tomes you don't need into your deck). If you have all the tomes you need for the moment, it still draws a card which is still very good value! On top of this it is tutoring which really and definetely is very powerful. Compare this to arcane iniate which can draw multiple cards, but only searches three cards of your deck. It gets a doom token to balance it's effect! This card does not really take your ally slot, since it frontloads its whole power. You can discard it afterwards and you're still fine. I think an evaluation of this card needs to look at the available tomes first and foremost. — Nils · 1 7/24/18
I dont really agree with this review. For Daisy Walker having tomes in play is every bit as important, even moreso, as having weapons is for a combat character. Combat characters jump through hoops to have enough weapons or to be able to tutor their ideal weapons. And just like for combat characters, once you've got your main weapon on the table, the rest become redundant and so do the tutors. Even if you dont need the tomes and play this guy purely for tank reasons you still get to filter out some unneeded books and heighten your draw chances for more useful cards. — Tsuruki23 · 921 9/6/18
The value only goes up if you have some Tome Options in your deck, if you have a copy of Ecyclopedia as well as Tome of Lore. — Tsuruki23 · 921 9/6/18
This is also a rare occurrence of a "search your deck" which will trigger all Research options. Using it with Mandy will immediately fetch her weakness which can be good to get it out of the way — Shiver · 1 11/25/19
I'm not fond of using this in Mandy unless you have appropriate Tome options included. Yes, it can get your weakness 'out of the way' - but so do most of Mandy's other search options, since they let you choose when you want to take the risk and respond accordingly. In addition, Mandy's weakness is very likely to trigger before you ever pull this, meaning it can 'whiff' the same way as if you've already pulled Tomes. You don't even need it for triggering Research - it may be a guaranteed trigger, but Mandy decks have enough searches that you'll tend to trigger all of your Researches without it, so the 'guarantee' isn't worth the other costs. — Ruduen · 195 1/13/20
I do still like this in Mandy, but only if I'm also running Calling in Favors and other allies. Assuming Rook gets taboo'd- which seems very likely- Librarian, Favors, and Old Book of Lore might see more play. — StyxTBeuford · 958 3/7/20