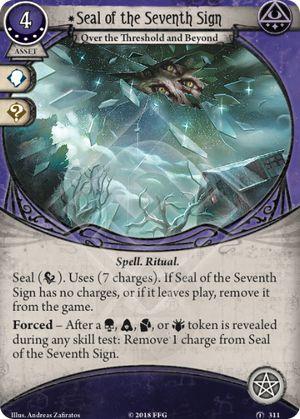 First some numbers. If you combine this with Chthonian Stone and a reasonable bag, you might have 4 out of 15 tokens that cost a charge, meaning this will last around 26-27 draws on average.

On the plus side, this card provides a shield against the dreaded auto-fail token that no other card matches. You could potentially protect everyone in a 4-person party, no matter where they are located, from auto-fail for 3 full rounds. From that perspective, it seems like a pretty powerful effect.

The problem, and the reason I find this card hard to like, is the extreme cost for each failure you prevent. You are probably going to prevent 1-2 tentacle draws by playing this card, at a cost of an action, 4 resources, and a 5 XP cost card. That could be worth it to cancel tentacle draws at really bad times. But you can’t control which tentacle draws you are preventing; a lot of the time, the auto-fail you are preventing, would have come during an investigate check or some other task with no great penalty for failing other than losing an action (or worse, during a treachery skill check you end up failing anyway). And the benefit of not losing 1-2 actions is tiny compared to the heavy cost of this card. You really need to prevent an auto-fail with a heavy, heavy penalty for failure, in order to justify the cost of this card.

And while no other card quite does what this does, there are other ways to protect against auto-fail that are an awful lot cheaper. Such as Time Warp, for example. And while the comparison isn’t a direct one, it is worth mentioning that Father Mateo’s special power does a better job of stopping really important auto-fails than this card, yet it isn’t even that great of a power.

It seems like the time to use this card, would be when the party is about to perform a series of critical actions, every single one of which absolutely has to succeed, and the party is spending a ton of resources to make sure they all succeed, and needs to guard against the auto-fail. Kind of specialized in my book for a 5 XP card.

ChristopherA · 24
Good negative binomial math on the token draws. Without the Stone you're looking at 5/16 which puts you around 22-23 draws before it leaves, and when on its own the Token would've come up on average 1/17 times, you're likely just preventing one bad draw. Obviously the more diluted the bag the better this gets, so this could work better in the last scenarios where the campaign typically throws in more numbered tokens. I think the only way to make this card work is through sealing/ignoring tokens (Counterspell could help here) and through some method of extending its life (Akachi, Recharge), and even there I think you're better off like you said with Time Warp in the first place. I think the best way to deal with autofails is still to just have testless cards in your deck (your Intel Reports, Drawn to the Flames, etc). — StyxTBeuford · 2056 7/5/19
You fail to account for the benefit of test security. — Tsuruki23 · 1128 7/9/19
Honestly this card isn't that great on a large scale, but it does provide comfort and guarantee a prepared win within the campaign — Elecyan · 1 11/12/19
6

Hello. Hi. My name is Norman Withers and I will now expose to you why Seal of the Seventh Sign is good.

Circumstance: 2-4 players. Somebody else has promised me that I don't need Shrivelling, so I just focus on the clues! This means that I have 2 unused arcane slots.

Slot 1: Protective Incantation, sealing a , or .

I generate resources with Dr. Milan Christopher and my cards are cheap thanks to my ability, so money is not a problem for me, and even when the Seal of the Seventh Sign runs its course, ill have cash enough and the draw speed to play the other one right away, or just fill the slot with the other Protective Incantation.

P.S. Even if I'm not around I still think Seal of the Seventh Sign is quite good, it's great on easier difficulties where the largest penalties are lower and easier to cover, the freedom to just brute through every check with no chance is tremendous, the main question to ask before you add it is: how much do you need your arcane slots? For most characters the answer is "Dedicated to Shrivelling and Rite of Seeking exclusively".

P.S.P.S. Silly of me, I am becoming forgetful with age. I especially like to bring my Seal of the Seventh Sign in Dunwich, where we the investigators may affect the token pool!

This card will see very little use because of the high XP cost and the fact that it uses an arcane slot. It can be searched with Arcane Initiate, discounted by Uncage the Soul, gets a bonus charge from Akachi Onyele, and can be returned to play again with Spirit-Speaker. It synergizes with The Chthonian Stone but not with most of the other cards that refer to chaos tokens. I guess this card is best on easy mode where you don't need powerful cards like Shrivelling (which costs the same XP and arcane slot!) and you only fail skill tests when the auto-fail token comes up. But that's not a fun way to play, in my opinion.

jmmeye3 · 325
Seal of the Seventh Sign distinctly cannot be ‘returned to play again with Spirit-Speaker’ because using its ability to return SotSS to your hand moves it to an out of play zone (your hand) which causes it to be removed from the game. — Death by Chocolate · 55 1/5/19
That’s right, sorry about the error. — jmmeye3 · 325 1/5/19
I think people need to remember that tome of shadows gives you extra arcane slots, so that limit of 2 isn't set in stone. Getting all the xp for tomes and this AND your core spells is pretty tricky, though. — SGPrometheus · 250 1/5/19
Tome of shadows also recharges this card. I agree in solo you need both arcane slots for rite of seeking and a combat spell but bigger teams don’t need that. Some investigators can also use other combat options like Norman strange solution or Jim any 0 xp weapon. There’s also timeworn brand... — Django · 2716 1/5/19
Seal of the elder sign is an interesting choice for Marie Lambeau since she can collect clues with her good intellect and doesn't need Rite of seeking! — mogwen · 159 1/5/19
@Django Norman can’t use Strange Solution side he only gets level 0 Seeker cards, but it’s true he (like Marie) doesn’t need Rite of Seeking due to natural Intelligence. — Death by Chocolate · 55 1/6/19
0