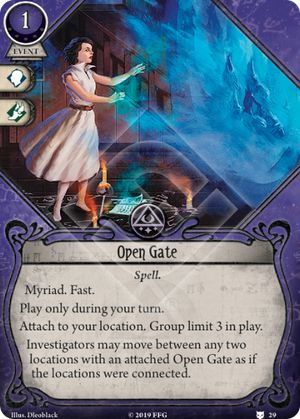 Not terrible, not great. Good for very specific characters, anybody else just doesn't have the deckspace.

Open Gate is fun, whatever else it may be. Opening a gate to create shortcuts is fun, when you pull it off usefully it's a YAY moment!

The thing about this card though....

You tend to play this card in places where you HAVE been, and it wont help you get places you're actually going to. The only times this is helpful is when you backtrack for some reason or if a map isn't ushering you in just the one general direction (which most maps have a tendency to do), in many maps you're only netting one action saved, sometimes two, depressingly often zero.

In multiplayer it's WAY more helpful, one character can pepper locations like Hanzel & Gretel and the other dudes skip-step in their wake. Going faster than them other characters is needed for this to be possible, it's not unusual for a character to surge forward to get clues or an enemy, you can plan rounds where a vanguard is dropping gates and the others follow suit to catch up. You can easily save your team half a dozen+ actions in this way, even if you never actually used the gates yourself.

Synergies for Open Gates include:

I frankly wouldn't even try Open Gate for other characters than the above, Akachi Onyele and Agnes Baker aren't fast enough and it would wreak havoc on their tight decks and cost curves. Jim Culver doesn't have the deck-space and there's no synergy, he doesn't struggle so much for actions as for consistency, same with Father Mateo. Sefina Rousseau likes to mess with her events and there's already a thousand good options. Diana Stanley has other stuff to do with her time, movement support is something that should be directed AT her, not From her. Patrice Hathaway can certainly find them fast, but they'll drip from her fingers long before you can put them in the right place and actually set up a good network.

Tsuruki23 · 886
"Not terrible, not great" seems to be a good description of all the myriad cards. The ability to include three of them in a deck an the way they synergize with each other is offset by the fact that they can often be difficult to make full use out of and come at a substantial opportunity cost. I'm sure they were designed that way. — Sassenach · 60 10/13/19
While Open Gate May sometimes be a dud for The Painted World, it is not always a dud. It does not allow you to play a fourth copy of Find Gate, no, but most games you won’t even see the third copy of the card - and Painting a Gate means that you have two gates available now, which, in the scenarios where it is important is, well, important. And even if you do hit the triple gate limit, any extra OGs pitch for Sefina’s two most used stats. (In case I’ve misunderstood your viewing it as a dud: remember that nothing makes it stop acting as a copy of Open Gate until it eventually leaves play, so you can attach it to a location and use it.) — Death by Chocolate · 13 10/13/19
This is wrong, for the same reason Painted world cannot hit Delve too deep, it cannot usefully copy Open gate. Painted world self removes from the game after play, I.E you play the gate, then it just POOF, gone. — Tsuruki23 · 886 10/13/19
Nevermind, checked the rules, it holds up. — Tsuruki23 · 886 10/13/19
I'm currently in 4 player through TCU and this card together with Shortcut 2 is awesome! It helps our fighters so much, to get those cultists down. It also helps that arcane initiate can find these. — Django · 2228 10/18/19
For Marie, Feed the Mind is good to get all 3 portals earlier. — Django · 2228 10/18/19
I can say that I just used it for great effect in Heart of the Elders, which requires a lot of shuttling back and forth clues between increasingly more distant locations. — Eldan · 2 10/28/19
Can we get a doublecheck if this actually works with Shortcut(2)? Open Gate does not actually connect the locations. — Discordia · 1 11/19/19
If i buy Open Gate with versatile on Ursula Downs, will i get 3 copies because of myriad orjust one useless? — Charles Dexter Ward · 281 1/6/20