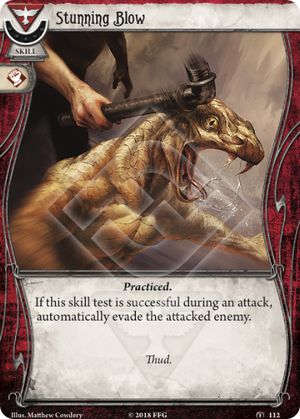 This is a FANTASTIC multiplayer card. An incredibly powerful tool that gives you an exclusive type of action compression useful mostly in a very particular circumstance.

The scene that I am referring to is the big moment where you engage the big-boss. The fat big bad with a health pool dependent on player count, a guy too large for a single investigator to take on unaided or just some moderately large monster that you happen to run into.

Let me explain: Often in multiplayer you will find yourself up against some threat that your limited number of actions will prevent from killing in one round, either the foe is standing a couple locations away, engaged with somebody else, or just outright too healthy to die in a single round. This card lets you:

All of this is compressed, in a single action, that is probably easy for you to strength buff and max out since you're the designated boss-killer. Oh and you get a +1 on the attack attempt too.

I think I've now mentioned all that this card has to offer, compress an evade action into your attack action to lay down the hurt on a major scenario threat. It's better in multiplayer than single-player due to the significantly increased health pools, this card effectively buy's you the breathing room you need to, without pause, work on that massive health pool.

Edit: In multiplayer you can also use Stunning Blow to dislodge a friend in trouble, a friendly William Yorick or "Ashcan" Pete running up and knocking out the thing holding up the clue dude can really grease things along.

Tsuruki23 · 2349
Hey! FFG stole this card idea from me (https://i.imgur.com/TIIhui9.jpg) Not that it was terribly original to begin with; but the similarity is uncanny. Where are my royalties?! ;-) — Herumen · 1652 6/27/18
Another big advantage in multi, you don't need to engage the target with this card. But you've spent a lot of words to say the same thing over and over... — Django · 4426 6/28/18
Amusingly, but typically inefficiently, this card can be paired with Marksmanship (Zoey or Yorick) to evade an enemy in a connecting location. This would primarily be useful for delaying the arrival of a Hunter enemy that you’ll have to deal with eventually. — Death by Chocolate · 1251 6/28/18
I agree with your assessment! I was impressed enough to include 2 in a Pete deck even — Malgox · 20 2/12/19
4

Can I review the card's illustration and flavour text only? It might be my favourite in the game; where else does one see a monster looking so foolish?

For solo Rita Young this is almost an auto-include. Keeping a hand free for a simple Flashlight or Old Keyring means that taking an Ornate Bow or my fave the Old Hunting Rifle is less practical. Better to one-hand a Meat Cleaver or Fire Extinguisher and run a clue helper in the other hand. So Stunning Blow becomes a super-useful tool to add damage and evade, then recur with Resourceful.

Hey, why don't we have a pipe or a pipe wrench as a weapon?

It MIGHT be worth taking this in Yorrick. Throwing a punch to dodge a boss for a round and finish them off later can be really good.

It also lets you fight an enemy engaged with an ally so that they can be evaded.

But lets be realistic, it isn't really doing a ton for you right this second.

Some people bring up the Waylay combo, but I don't see it right now. If you are waylaying them after you need high evade as well as high fight.

Not hot on this one right now due to its really narrow application as a way to tie up a boss or threat for a round. Hopefully it plays well with the inevitable pipe or pipe wrench weapon for theme.

Myriad · 1157
It has also a decent synergy with Sneak Attack - stun that badass with wrench and finish the job with garrote. — KptMarchewa · 1 6/14/18
Yup! It does. I had not considered that as I think only Jenny or a weird Pete deck would bother at the moment (since Wendy is pretty bad at that combo). Even for them it is kind of a stretch. — Myriad · 1157 6/14/18
I think of it as evading with Combat. But that means Yorick or Zoey (and maybe Duke), both of whom would probably rather defeat the thing anyway, unless they're trying to avoid Vengeance. — CSerpent · 107 6/15/18
A fire axe Minh could play it alright. Either to shore up her abilities or to buff a fighters attack and buy a round. — Myriad · 1157 6/16/18
Having just played The House Always Wins, I can see it as an economical way to deal with the Conglomeration of Spheres for a while.. — Katsue · 9 6/17/18
Silas Marsh has both strength 4 and agility 4, and can pull back the Stunning Blow if the fight will fail, so he has pretty good synergy with the Waylay combo. At least its something to do for him that doesn't involve Dark Horse for a change. — The_Wall · 261 6/26/18
I believe you are missing the value of this card. It basically lets you evade with your attack stat while still doing damage. That is extremely useful. — Tilted Libra · 28 6/10/20
1

Im very surprised how good this card is. Yorrick and Ashcan Pete should always have it in their deck, especially in multiplayer. It really helps with tricky situations like moving on your second move to a location with an enemy you cant kill with one attack. It also helps avoiding accidental hits.