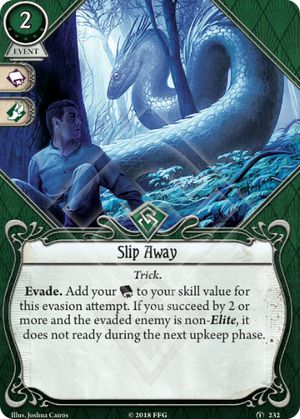 The most ideal use for this card is for someone with access to with high (4 or 5) but mediocre (ideally 3) , allowing them to use their brains to evade. Until very recently, the only Investigator that fits that bill and can take this card is Rex Murphy, and Rex probably wont even take it because it's not the best use for his 5 off slots. Dream Eaters added Mandy Thompson, whose 3 and 1 means she's a prime candidate for what Slip Away provides. Her means of defense are quite limited, so Slip Away gives her solid defense, alongside Decoy and Think on Your Feet. So the next best thing is to think of Investigators who can at least use a high combined total to lockdown an enemy for an extra turn. This is Finn Edwards (8), Rita Young (7), Wendy Adams (7), "Skids" O'Toole (7), and again Rex Murphy (7).

The next question is what does this card let you do that normal evades don't? Well, it can lockdown a particularly bad non-elite enemy for an extra turn if you over succeed. In multiplayer this feels like a pretty big waste of a card slot, but in solo this can be quite useful if you play an evasive character who starts getting bogged down by continually drawing enemies. In that regard I think it works best for Finn, as the action is free anyway, and if he's running Pickpocketing he'll make up for the opportunity cost quite a bit. It's a good emergency card to have in your back pocket, though it's no Elusive. it's also still pretty good for solo Sefina Rousseau as you can lockdown several enemies in a short span of time with The Painted World, and she tests this card at a combined total of 6, which is still at least decent. Wendy Adams and Rita Young can use it to buy time to set up Waylay.

Overall a decent card, but one that's quite niche unless you're playing solo. If you're going with Mandy Thompson, I think this should be the first card you include.

StyxTBeuford · 747
I will certainly be running this in my 0XP Jenny deck that will get built into an evade, gather clues and do indirect damage deck with XP. Her blessed and cursed statline (3's) mean that she won't be able to evade well until she has some assets into play. It will probably get replaced by Suggestion (1) though after 1 or 2 scenarios. I do like the idea of having an enemy exhausted for an additional round. I think that could be a huge benefit. — TWWaterfalls · 279 12/30/19