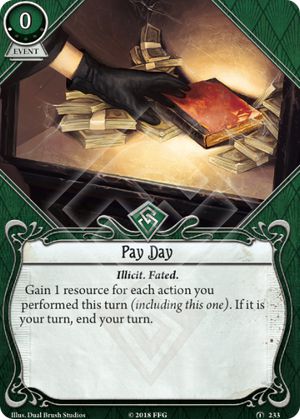 This is practically an auto-buy for Finn Edwards, who can manage five actions right out of the starting gate using his free evade and Quick Thinking, and potentially boost it to truly absurd extremes later on with upgraded .41 Derringer and Ace in the Hole - plus he's the only Rogue who can't get his hands on a Level-4 Hot Streak.

The "end your turn" effect is mostly academic, since you want this to be your last action anyway. It's sad that Pay Day is based on the number of actions you performed "this turn" instead of "this phase," because otherwise you could get 16 resources from playing Pay Day at the end of your turn, and 17 from playing a second one on another player's turn using Quick Thinking, for a total of 33 resources! (Exactly how you'd get 17 actions on one turn is left as a fairly silly exercise for the reader.) More interestingly, the "end your turn" effect suggests that other cards with a "for each action you performed this turn" effect may eventually turn up, and they wanted to nip game-breaking combos in the bud.

So Finn definitely wants it. Does anybody else? That's a tougher call. If you've built your Rogue with decent access to extra actions (mainly using the abovementioned cards), Pay Day is a decent replacement for Emergency Cache - you get better efficiency, but it has more playing restrictions. In that way, it's analogous to Uncage the Soul.

The main problem there is that the Rogue class has lots of ways to accumulate resources, and some of them are 0-level cards, like Lone Wolf, "Watch this!", and Decorated Skull, and Pay Day doesn't distinguish itself that well. It's not bad for most Rogues, but it's not amazing either. If you're running Ace in the Hole or the upcoming Borrowed Time, though, then of course that analysis goes right out the window.

Notably, Pay Day's ability to monetize on large action-counts might induce me to like Leo De Luca again. I don't think Pay Day alone is enough to tip the scales, but perhaps someday soon...

I'm thinking Tony Morgan should strongly consider this card as an early upgrade. First off, he's already motivated to fight enemies with Bounties on them with an upgraded .41 Derringer. With his native 5 you can already see that, just by doing what Tony already wants to do, you can easily achieve 5+ action turns. Then you factor in all the ways you'd normally try to get big action turns with Rogues: Leo De Luca, Ace in the Hole, Borrowed Time, an easily activated Quick Thinking on, say, a Derringer Fight test, and maybe couple that with Double or Nothing if you're feeling extra cheeky.

Also I think this was overlooked in the other review, but I think it's interesting that Borrowed Time lets you defer actions by spending actions. This means technically if you have 3 charges on Borrowed Time, you can continually defer those actions all game and you'd technically be taking 6 action turns. This means that, if you choose to defer those actions over and over again, you can play Pay Day for 6 resources whenever it comes up. Not bad.

Now it's unrealistic to say you'd be able to achieve the maximum number of potential actions in one turn because it's so heavily dependent on oversuccess and having the right cards all at once, but just for fun let's see what's possible. Start with your default 3. You gain +1 from doing at least one Bounty Fight and +1 from Leo. Use Quick Thinking and Double or Nothing on a Derringer test (without Taboo you could commit 2 Quick Thinking) to net +4 actions (or +6 without Taboo). Gain +3 from Borrowed Time and another +3 from Ace in the Hole. You're looking at 15 or 17 actions depending on Taboo. Will you ever get that many? Probably not, but you can easily get 5 or so between Tony's ability and Leo, and 6 or 7 won't be hard to pull off thanks to Quick Thinking and Derringer. If you have the Borrowed Time loop happening, you can bump all those numbers up by 3 easily.

Not much of a review, but I think, the art features Trish Scarborough, right after she opened the safe on Manual Dexterity. Would you agree? The length of the sleeve is not matching, but she could have rolled it up on her right arm, which she used to crack the safe, while is clearly using her left hand to grab into it.