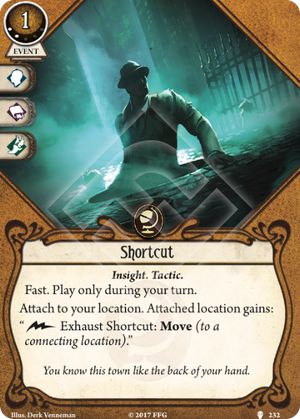 Shortcut is this magic little boost that "burst" moves you around the map, It does not trigger opportunity attacks and not being an action can have nice interactions with specific cards and circumstances (for example to move an enemy around to play Scene of the Crime, get away from a massive enemy, get away after spending 3 actions to evade, ETC.). There is also a lot to be said about the added burst movement, having all 3 actions to attack/evade an enemy can be important.

Shortcut has all the same mechanics, but an added cost of 1 resource and 2 XP makes it a lot trickier to work into a deck, the cost is very prohibitive. First off, the biggest difference is that Shortcut is a persistent effect, so long as you keep entering the affected location you reap a benefit. In solo you need to play this card with finesse and find the location where you expect to pass by 2+ times, if you cannot then at least save it for that all-important moment where bonus movement is crucial. Its easier in multiplayer since the bonus moves will be used by your friends at least once, even in monodirectional maps like Essex County Express.

In fact Shortcut grows wings in any scenario that has locations you tend to move through routinely and every campaign has a couple such maps, but, I especially recommend Shortcut in Dunwich, 6 of its scenarios have at least one spot that will probably have you passing through 3+ times, sometimes passing through every single round for half the scenario. Also, final scenarios seem to have a way of making you run around a particular location a lot so give extra consideration to Shortcut before a final scenario.

Don't forget to consider your investigator's particular abilities, Roland Banks should never leave home without Shortcut and can give consideration to the upgrade (minimum one copy if you go for Stick to the Plan, which can host Shortcut), so should Ursula Downs, both of these characters really benefit from extra actions. Supporty Daisy Walker and Minh Thi Phan decks should also consider it.

Although Shortcut has a LOT of power, compared to the un-upgraded version, the new -careful- way of playing it actually removes a lot of its charm, the spontaneous power is gone. The ability to capitalize opportunistically is still there, but now you must weight the opportunity up against ideal positioning and the added cost becomes a "Why did I bother to spend 2 XP on this?!" moment.

So, remember how Pathfinder is a good card right?

What if I told you, that there was a version of pathfinder that was fast and could be used by your whole group?

Well, this card is as close as it gets and depending on the scenario and the player count it might JUST get you to that level of efficiency.

Add to this fact that Seekers typically have some extra experience to play with and I think this is an auto include in most seeker builds.

Myriad · 1104
Note that Level 2 Shortcut is inferior to Level 0 Shortcut in one critical point - it does not 'move', but instead activates a 'Move', and therefore provokes an attack of opportunity. Attaching the Shortcut to the location does not, of course, since it is a Fast. — Cluny · 46 3/21/18
Cluny- that is incorrect: "Attacks of Opportunity are only triggered when 1 or more of an investigator’s actions are being spent or used to trigger an ability or action. abilities with a bold action designator do not provoke attacks of opportunity." — lunaticcalm · 1 3/30/18
Worth noting that Roland Banks can attach this card to 'Stick to the Plan' in order to ensure it can be played early for good value. — Low_Chance · 6 5/1/18
2

I find it quite interesting that the level 0 version of Shortcut does not count as a move action, but because of the bold action designator present on this level 2 version, a single use of it DOES count as a move action (albeit one you get to perform for free and without provoking attacks of opportunity thanks to it being a free triggered ability). There are scenario cards where this matters; any Forced ability that responds to an investigator using a "move action" will occur with this "upgraded" version, but it won't for the level 0 version. (A certain location in the first scenario for Path to Carcosa comes to mind.)

This card is awesome in Joe Diamond's hunch deck! It immediately saves you an action, and then another action every time you use it again. It wasn't hard for me to place it on commonly tread locations when I used it.

jmmeye3 · 541
It is still situationally useful in a hunch deck. Sometimes you will only be in a spot that has one or two exits and you don't plan on leaving it again. Due to that, I don't think it makes the cut in a hunch deck. Play it in your normal deck. — Myriad · 1104 7/28/19
Even if you only use it once, it's still somewhat useful (saves you one move action for free)! Therefore, it's less situational than most of the options for the hunch deck. That's why I was so happy with it's performance in the hunch deck. It's so sad when you have to let the hunch go... — jmmeye3 · 541 7/28/19
For me, the problem is that for many hunches you want to be on the right location (have a clue on it or have an enemy on it). Then Shortcut is very useful to have in your hand. It enhances your flexibility a lot and therefore also helps playing the hunches. — trazoM · 9 7/29/19
I agree with trazoM - the flexibility it adds to your hunch deck by being in your hand seems much stronger than the value of it being in your hunch deck - especially if you are running the chunkier (but high impact 3 and 4 cost situational insights in your hunch deck). — Death by Chocolate · 834 7/30/19
Plus it's actually easier to draw this in your opening hand than it is to draw it from the hunch deck. At the start of the game, 2/11 chance you draw it from your hunch deck versus about 3/10 you draw at least one in your opening hand before mulligans. After mulligans, and combined with Studious, NSU, Rook, Eureka!, etc. and it's not even close. You definitely main deck this in my opinion. — StyxTBeuford · 12504 8/2/19