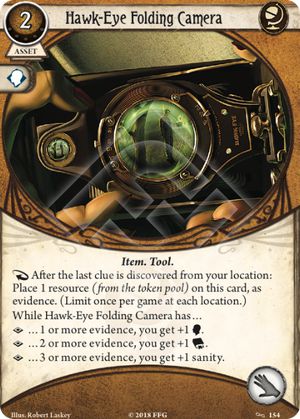 In a number of ways, this suffers from the same problems a number of assets do: the Hawk-Eye Folding Camera becomes a less useful investment for every turn the game lasts, because of the slow buildup.

But most seekers don't really benefit from said package deal. Between naturally high sanity pools, a surplus of allies with decent sanity soak like Dr. Milan Christopher, Charles Ross, Esq., Dr. William T. Maleson, and Mr. "Rook", and Higher Education, they can afford to take most tests on the chin, and spend their way past everything else. So, in practice, what they really want is that +1 .

How long does it take said +1 to come online? Well, to some extent, you can cheat around the condition. If you play it when a location has 1 clue on it, clear that clue, Pathfinder over to another location with 1 clue on it, then clear that location too, you could theoretically do it in three actions. However,this is both unlikely, and is discounting the prior effort involved in discovering clues at said location.

A more useful measure might be "how many investigate tests will this card help me with, if I play it the second I draw it?" The best measure for that would be the act deck. The number of clues needed in a given scenario tends to hover at around 5 to 6 clues. In turn, the minimum number of clues at a location is usually 1. That means if this is played in your opening hand, it will only help you for 2/3rds of the game. And if you draw it, say, halfway through, it'll only help you on the last 1 checks.

Let's compare with the venerable Magnifying Glass. Sure, you only get the +1 if investigating. But the list of things a raw boost helps with besides an investigate is actually pretty small, consisting of the following:

Most of these are rare enough that you can afford to commit to them instead, or pay your college debts to make them go away. And Magnifying Glass is fast, cheaper, and provides that key bonus to investigation attempts right away. Even if you draw it on turn 14, and there's two clues left to discover before the last act advances, it will still help you for those two clues.

For most seekers, the Magnifying Glass is a superior option, which competes for the same hand slots. In order to really make good use of this camera, that +1 boost needs to be meaningful, because it's the one that turns on first, and the one that offers a niche over other cards that would boost now instead of later. So, who wants it?

Now, I'd say the one investigator who really likes this card is Norman Withers.

In short, this card tends to be overshadowed by Magnifying Glass for pure seekers, while competing for highly contested slots in either deckbuilding or play area in other investigators.

Abodmuthkat · 146
No love for Joe Diamond? — Vittek · 1 7/19/19
I would argue that the card is excellent in Marie. As a 4-willpower mystic with extra spell actions, Marie desperately needs willpower buffs. The camera does that, and does so without occupying the accessory/ally slot. It adds consistency and stacks nicely with other willpower buffs. — ak45 · 69 7/19/19
Not to mention it buffs her Willpower first, which is definitely more valuable for a Mystic. — StyxTBeuford · 610 7/19/19
It's better in 1-2 player cause you can clear most locations in one turn. Clue events are also pretty cool to power it up, like scene of the crime or drawn to flame. I'm currently using it with carolyn fern and the will 5 together wtih huberts key is a great encounter protection. — Django · 2116 7/20/19
I think that what holds this card down is that you get first the willpower and then the intellect boost. In standard difficulty though this t be a big problem — Alogon · 291 7/22/19
I meant, *shouldn't be a big problem :D — Alogon · 291 7/22/19
I want to add the point that Hawkeye is definitely not a bad card, and a diect comparison to Magnifying class just isnt appropriate, you see 2/3rds of the card is all about defense! +Willpower, +sanity, a bunch of characters loves them some horror tank and treachery resistance. — Tsuruki23 · 861 7/26/19
The comparison to Magnifying Glass is more in regards to the alternatives Seekers could run for hand slots. I think people in general agree that most Seekers would just prefer the cheaper and faster Magnifying Glass in their hands over the Cameras. Running both is a bad idea since the Cameras want to stay in your hands and need to be brought in early to really pay off, so you wouldn't want to replace either tool with the other. For non-Seekers who pull from Mystic (Marie, Carolyn) and Seekers who lean Mystic (Norman, Daisy) I think the camera is a solid card. — StyxTBeuford · 610 7/26/19
Joe Diamond is basically in the same position as Daisy, exacerbated. He's trying to be both a Guardian and a Seeker, which are full-time roles. — Abodmuthkat · 146 7/28/19
Regarding the camera being defensive, part of my point is that the defense being offered is redundant for most Seekers. So what they want is the intellect boost, usually. — Abodmuthkat · 146 7/28/19
And Marie definitely is one of the better users of the camera. But for her, it's two cards out of the five she can take from the Seeker or Survivor cardpool, both of which have very strong options. For Norman, it's two out of twenty five cards, which is a much easier sell. — Abodmuthkat · 146 7/28/19
The biggest reason that I want to use this is that it gives an investigator the same benefit as Hubert's Key but occupies a different slot. That turns a 3 intellect investigator into a potential 5 (or 6 both are powered up). This is the biggest benefit for Mystic/Seekers imo instead of a reason to not use it. I am planning on running this in a Jim deck sometime. In Marie it is even better since she can get to a 6/6 relatively easily. — TWWaterfalls · 187 12/8/19
2

Staple. End of review. Thanks FFG. Now how do I make it 200 characters long? I'll maybe say that it is even better, when playing seekers that like magic. I'd play it on Roland also. One handed weapons, coupled with xp dynamite tend to be enough.

Onetribe · 201
It's a staple for Marie as well. Draw it early and she can get to 5/5 very quickly. Couple it with St Hubert's Key for 6/6. All of a sudden she's a monster. — Sassenach · 59 6/20/19
I think it works well for investigators who have 3+ willpower and 3+ intellect already and want to use both. Otherwise I tend to think that Magnifying Glass works better- seekers would rather have that +1 intellect now rather than later, and having to clear 2 locations first decreases the net benefit of the intellect boost quite a bit. The glass also has a more relevant seeker icon, is fast, and costs 1 which means you can put it out alongside Milan and get going turn 1. Plus there's the upgraded glass which is just an easy discount. So I think Marie likes this, Carolyn likes this, and Daisy likes this. Ursula might, but I think I'd still rather take Magnifying Glass with her since she doesn't have access to Mystic cards. — StyxTBeuford · 610 6/23/19
I'm also torn with this and magnifying glass for Carolyn. The Will boost helps with her signature card (Will test VS 2), but the tempo loss in turn 1 is an issue for me. — Django · 2116 6/25/19
@Django Her signature card is Int test VS 2, but the camera still helps (once it has two evidence) while magnifying glass does not. — Death by Chocolate · 12 6/25/19
Thanks, for some reason i thought her signature was Will based. This makes it a lot better and nearly auto success when building her as cluer. — Django · 2116 6/27/19