Julian Kok
Before the Black Throne #324. 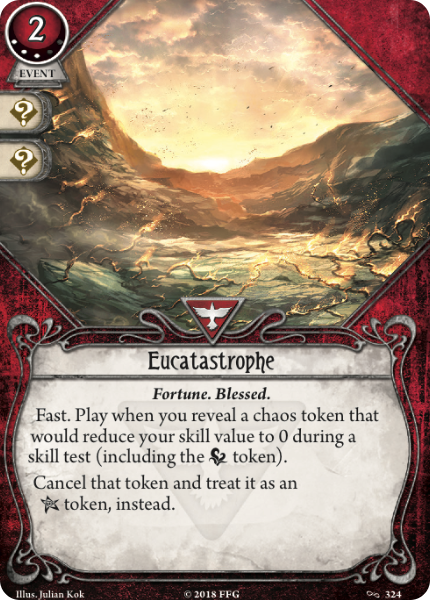 Uber-Lucky!. The end-all be all switcheroo upset card that turns bad sitations on end and delivers unto you, salvation. This card is so good that a Taboo list appearance wouldn't surprise me in the slightest. For Silas Marsh i'dd take this even if it got the Key of Ys treatment.

First off, the requirement: Your total for a skill test must be 0!

This means that all of your skill value must be totally negated by a test, I.E, the effect is easier to trigger when your starting point is low, so that it might be negated by relatively mild negative tokens like a -2 or -3.

If you skill value is high, it becomes extremely unlikely for the requirement to trigger, attacking an enemy at +6 for example Yorick+Machete+Beat Cop, you'dd need a or somehow net -6 from the token draw, even on hard this is very unlikely! You'dd be much better served by a Lucky! that'd easily let you hit the required number (of probably 2-4) when your baseline is so high.

On the flip-side, if your starting point is +2 or +3, there are plenty of tokens in the average chaos bag that will totally negate that!

This leaves you two main uses for Eucatastrophe:

1) A tool to force success through tests which you have no business beating, for example attempting 4 tests with just 2, a common case for a variety of characters whose give them automatic success or +2, I.E, success!

2) A ward against worst-case scenarios, where an or special token might negate your skill value completely. There are, in fact, a few scenarios where the complete skill negation is slightly more common, Forgotten age for example has a few places where there might be 2+ net autofails when certain circumstances arise and most campaigns have crazy tokens in the final scenario.

The characters for whom Eucatastrophe is best for, are therefor:

All of the above considered, a few characters rise up from the pile as obviously great characters for Eucatastrophe:

While Eucatastrophe is reasonable on the other characters who can take it, i feel that it's a lower priority, especially for Wendy Adams who has no appropriate stats to abuse and a +0 on her . Besides she excells at circumventing bad token draws to begin with!

Tsuruki23 · 866
Not sure I agree that this doesn't suit Wendy. With her amulet in play this is an auto succeed, which opens up some incredible combo potential. Trigger 2x Drawing Thin for 4 resources and to ensure failure then chuck in Double or Nothing to really ensure failure and this gives her a guaranteed 4 damage from a single swing of the baseball bat, or 6 damage if used in conjunction with Backstab. It would then be sitting right there at the top of the discard pile to be re-used on the following action. Seems pretty powerful to me, albeit situational. — Sassenach · 59 8/22/19
Even without Wendy's Amulet in play i think this card is amazing for Wendy. Yorick and Silas can recur this card very easily, but they have to pay 2 resources each time, and Silas in particular is very well suited to not having his test value brought down to 0. Wendy can hold back on this as insurance alongside Lucky! and her main ability. If she fails by a small margin after a token pull, she uses Lucky!, and if she fails to 0 she uses this. It's such great backup insurance that she wont need to continually pour resources into unlike the other guys. And she can still recur it very easily. To guarantee it, commit a Resourceful to a test of 3 on 3 or less (her base investigate stat on 3 shroud for example) with Lucky! and another Eucatastrophe in hand. Or just use Resourceful on a test she's more likely to pass, like a Lockpicks investigate on a low shroud or a Fire Axe attack. I think people are horribly underestimating this card for Wendy, and I genuinely think it's going to be strongest for her. — StyxTBeuford · 632 8/22/19
Do keep in mind that Eucatastrophy is not affected, at all, by the test difficulty. it doesnt matter if you chuck Double or nothing at a test and Drawing thinm if your skill value at the end isnt 0, it wont hit Eucatastrophy. — Tsuruki23 · 866 8/22/19
This means that taking tests at +3, such as by swinging baseball bat or just her unmodified intellect, they stand pretty good chances at hitting -2 and therefore not triggering Eucatastrophy. — Tsuruki23 · 866 8/22/19
I don't understand your point here. Wendy's elder sign ability with the amulet in an auto succeed. This means that you can make the difficulty of the test as high as you like and still pass it. In other words, it's a guaranteed pass whether you need to use Eucatastrophe or not. Of course that's a big deal. It doesn't matter what token you draw because whatever it is will still succeed, so you can pile on as many cards like DoN or DT and still get the succeed effect as well as all the subsidiary benefits. Frankly who cares if you might have succeeded anyway ? Either way you succeed. — Sassenach · 59 8/22/19
You have to get your result down to 0 to play Eucatastrophe, so it does matter what token you draw. — StyxTBeuford · 632 8/23/19
OK, but what he said was that it doesn't matter about the test difficulty, which is nonsense. DoN and DT can make a test unpassable quite easily. — Sassenach · 59 8/23/19
I'm not sure I'm following what your issue is. Eucatastrophe's trigger is 100% independent of the test difficulty. It only cares if your skill value drops to 0. So you can play Euca when Wendy pulls a -4 with a Flashlight'd Investigate on a shroud 2 location (0 on 0, a pass) and you can play it when she pulls a -4 on a normal Investigate of a 2 shroud location (0 on 2, a failure). You could similarly play it if it were a Drawing Thin'd and Double or Nothing'd Investigate on that location where she pulls a -4 token (0 on 8, a failure). In none of these instances does the test difficulty help trigger Eucatastrophe. Unless you mean that the Elder Sign you get from Eucatastrophe might be useless in letting you pass a test with such a high difficulty, which is true except in the case of automatic success such as Wendy with her amulet out. Eucatastrophe's ability to be played is completely independent of test difficulty and dependent on token draw and skill level. — StyxTBeuford · 632 8/23/19
The point is that the ability to treat Eucatastrophe as an auto succeed allows Wendy to play DoN on a fight check, which she would never be able to do otherwise. Sure, she has to ensure that she doesn't only fail by 2, but that ought to be trivially easy for her given her low baseline stat. The harder she can make the test the better of course, because the harder it is the fewer the number of tokens that might cause it to whiff. By using DT and DoN she should be able to almost guarantee that it can't whiff. — Sassenach · 59 8/23/19
I dont follow. She can fail by 2, 200, or even succeed as in the example I showed. Failure is not at all a requirement of playing Eucatastrophe. You merely need your skill value to reach 0. It relies solely on token pull and not at all on test difficulty. — StyxTBeuford · 632 8/23/19
@Sassenach I think you are misunderstanding one thing. The condition to use Eucatastrophe is "Skill value" plus "token value" = 0. — Killbray · 1 8/24/19
So if your "skill value" is 3 the "token value" is "-2" and the skill test difficulty is "10" due to DoN shenaningans, you get "3" + "-2" which is equal 1 and you can't use eucatastrophe because the skill test difficulty really doesn't factor in the equation. It is also important to note that you might draw a "+1" which means even Calvin Wright with a 0 could find himself unable to use Eucatastrophe. — Killbray · 1 8/24/19
Ah yes. Sorry everyone, I seem to have had a temporary brain fart. — Sassenach · 59 8/26/19
No worries, it happens. — StyxTBeuford · 632 8/27/19
I think the best use of this card is as insurance against Old Hunting Rifle jamming. — matt88 · 990 8/29/19
Good add for Ashcan Pete IMO. Refreshes Duke and passes a failed test? Amazing — brerlapine · 17 9/12/19
7

Posting another clarification ruling from Matt.

Eucatastrophe reads, "Play when you reveal a chaos token that would reduce your skill value to 0 during a skill test (including the [Auto-fail] token)." Some of us on message boards are wondering whether, let's say, if Calvin Wright was at 0 intellect (with no additional boosts via any other assets or card effects), and Calvin initiated an intellect skill test. Calvin draws any zero or negative chaos token. In this situation the chaos token would cause his skill value to stay at 0, since it's already at 0 and cannot be lowered any further. Would Calvin be able to play Eucatastrophe in this situation? Did the chaos token "reduce the skill value to 0" in this case? What about the same question for a "Wendy Adams" with "Haunted" initiating a combat skill test? She would also have a skill value of 0 before drawing the skill token.