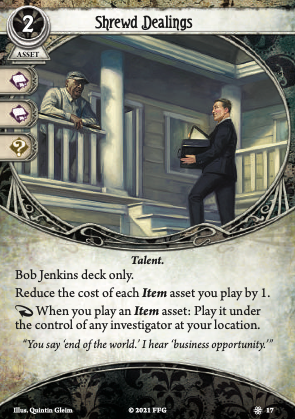 Here are all the things Bob can toss folks.

This card obviously gets stronger when you understand your team's deck and can slot specific things to give them a hand, you know, toss an Eye of the Djinn to Patrice, get Cho some Crystal Dreams, ect. These kinda effects are sorta a pain to talk about in a venue like this, and not with your buds while your planning your deck, so they don't get a ton of love here.

But Bob HAS to run this. And while the 1 resource discount is nice for him, because he needs to run it, it is important to look for 'generic' uses of it that don't require specific deck knowledge that may come in handy.

One thing that jumps out at me is that Bob has the potential to be a fairly strong 'healer' when it comes to physical damage, between Bandages and Leather Coat which both let you toss a 3 (or together, 6 or even 9), HP buffer onto a character in crisis. Bullet Proof Vest becomes really attractive on him as well: a 1 resource, heal 4? Nice!

He can do alright at healing horror too, with Keepsake and maybe Grimm's on a character liable to faceplant tests, but Grimm's is questionable and Mr. Pawterson takes up a more contested slot than Coat does. Elder Sign Amulet likewise could be a nice thing for him to toss into his deck to help buffer for lower sanity folk. And hey, if you are about to die to horror, the fact its an important slot low key doesn't matter anyway: if you are sitting at 1 horror it doesn't really matter how much you like your Cig Case or Fancy Mirror or whatever: you will be glad Bob is offering you a 2 or even 4 horror 'heal' right then and there.

Ultimately though, Bob is a dedicated multiplayer support character, more than anyone else in the cast (though we all just know someone is going to find a way to clear Devourer Below on Super Ultra Double Expert Arcade Edition with him solo!) because both his personal ability and his signature reference other players. So it truly does pay to be cognizant of them, even though you probably shouldn't build decks where someone NEEDS something from you.

Got a lot of rich characters who tend to not use their hand slots and could use a good trash clearing tool because they aren't swole enough to punch rats away bare handed? Toss your friendly Ursula or Sefina your spare Fire Axe. Got a Fin playing flex? Toss him your spare kicks too while your at it. Give Mandy (or most seekers really) a Lucky Cig Case to help them get their crazy combos out faster and end the scenario sooner.

Bob can't ever guarantee anyone he is going to be able to toss items to them unless he goes out of his way to get more effects that allow people to swap things around, so you shouldn't build around this specific card if you want to setup something nuts. Instead, you need to use your game knowledge and understanding of what other people might want, but not need. If you do get that Dream Crystalizer for The Boxer, make sure you have enough events yourself with useful symbols on them so that you can use it as well in case you just brick on finding this thing, and make sure Nathaniel doesn't skimp on skills just because you MIGHT be able to give this to him. You tossing an item to someone should make the scenario far easier, rather than you failing to toss someone something making someone's deck fall apart.

In essence, you need to be a good salesman: the stuff your hocking needs to be things people never even knew they needed, but the second you offer it to them they realize they realize life is going to be so much better with it.

The Good, the Meh, and the Ugly:

The Good: A dollar off all items? Fantastic. It's doesn't even exhaust. Between this and Bob's free play-item action, you've got a mini Ever Vigilant forever.

The Meh: The second bit seems neat; in practice it hits the same barriers as Teamwork as you mess with other deck's plans for their limited Slots. Slotless items sidestep this, so here's hoping this cycle includes more things like Pills, Smokes, Booze... More Booze... uh...

...wow. Bob may be more of a bootlegger than an actual bootlegger.

The Ugly: SO SWINGY. Bob REALLY wants this in his opening hand. Get it anywhere from mid-game on, and you're probably just committing it for an investigate. And to my knowledge, there's literally no tutor that'll help. It feels wasteful to ignore, but risky to count on, sort of like Wendy's Amulet which you can at least find in a Backpack.

(EDIT: Building a Bob deck and realized that L3 Lucky Cigarette Case is an excellent tutoring option available to him, both for this and more or less anything else.)

So, tl;dr... make friends with your local seeker!

HanoverFist · 551
Question is, can this be used with Bob's ability to play from another investigator and place the item under Bob's control? If so, that might be a good way to utilize duplicate items from other investigators. — Valkun · 25 12/6/21
Fair question- for my take, I can see no reason it wouldn't work. Shrewd Dealings triggers off Bob playing an item, and Bob's ability is for him to "play an item" out of another's hand. Where the item was played from is of no concern to Shrewd Dealings... Bob played an item, so he gets to use SD. This would mean (and it seems very much the intended design) that all of Bob's & SD's abilites can be used together to play an item, on his turn, with a free action, out of somebody else's hand, into that same person's control, at a 1R discount. Bob just got that person the toaster they always wanted at wholesale price! — HanoverFist · 551 12/15/21
Friends in Low Places now tutors this. — MrGoldbee · 1314 10/11/22
If this combos with Bob's normal ability as suggested, that suggests he can take an Item from any player's hand and play it under ANY player's control. In that case, Bob isn't limited to pushing his own Survivor and Rogue merch--he can deal stuff from any class he's playing with. — SleepyLibrarian · 34 10/18/22
1

Bob's extremely cool special talent gives us interesting new deck-building options where we can get Survivor and Rogue items to investigators that have never had access to them before. The problem is finding that special talent in Bob's deck.

Searches Bob can do himself to tutor Shrewd Dealings:

Searches with support from a Seeker (or someone who can use Seeker cards) to tutor Shrewd Dealings:

Searches Bob can do by "borrowing" a card from another player to tutor Shrewd Dealings:

Mandy's ability to enhance any search by an additional 3 cards would obviously be quite helpful to Bob, with the latest 50-card deck taboo, I'm not sure anyone will actually play Mandy anymore.

Edit to clarify: There are indeed many other search cards that can help Bob find and recur items and other assets, but this list is specifically regarding ways to tutor Shrewd Dealings, not other assets.

SleepyLibrarian · 34
I think your biggest miss here is not including backpack(2), 12 cards deep, up to 3 items and most importantly its an item itself, meaning bobs extra action and cataloge payments apply for it... getting the necessary items was never a problem with bob, certainly not to the extent that i would consider you owe me one to get search options from other players — niklas1meyer · 1 10/17/22
OMG, I can't believe I missed backpack in the list! I even have it in my Bob deck right now--just swiss cheese brain. Thanks for the catch. Will add with an edit. — SleepyLibrarian · 34 10/18/22
Oh, nope, wait. We're in the post on Shrewd Dealings. This isn't about Bob finding *items*--it's about Bob finding *this specific signature card*, which is a Talent, not an Item, and can't be found by Backpack. In fact, since it can be found by so few cards, I thought a post with an explicit list might be helpful for anyone considering building Bob deck that intended to supply critical Out-of-Class upgrades to other players. — SleepyLibrarian · 34 10/18/22
I feel like this is completely overlooking the best new card for this exact purpose, Friends in Low Places. You get to choice what traits it looks for, so you can pick Talent (and later add Item if you want to find those too.) — Death by Chocolate · 1251 10/19/22
@death by choc, thanks for the catch! I'll add it to v the post above above. — SleepyLibrarian · 34 10/30/22