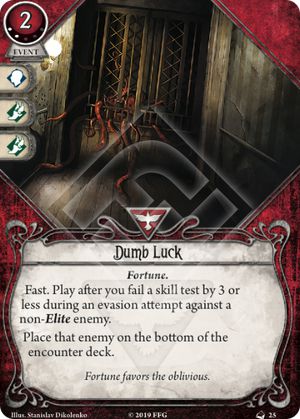 The Level-0 version of this card fills a weird, uncomfortable space, because, unlike its siblings Oops! and "Look what I found!", not every investigator wants to Evade. You either lean into it (like, say, Rita) or you just don't bother (most Guardians, but Leo for sure), and, while the last few cycles have made Evade a much more attractive option than in Core Set days, it's a "sometimes snack" for most investigators, so jankery around failing isn't so attractive. Besides, the effect, a one turn escape, was really situational, especially in Solo.

But... this card. The "fail within 3" makes it suddenly much more attractive as a clutch card for eligible low investigators. Outside of Patrice, who can't hold onto it for the perfect time, any other Survivor might want it for that annoying enemy which is hard to either Evade or Kill (I am looking at you, Conglomeration of Spheres. Moving the Enemy to the bottom of the Encounter Deck is a huge upgrade, since you are likely to avoid the Enemy for the rest of the scenario (although shuffling the Encounter Discard Pile into the Encounter Deck reduces the effectiveness a bit, and seems a bit more common in recent scenarios).

Outside of Survivor, who might like this? Agnes has better options for XP, while Tommy probably wants to hit (or get hit) rather than Evade, and I'm not sure Preston can land this often enough to be worth the XP. I think Minh might like it as a safety card, although she has a lot of other options.

LivefromBenefitSt · 342
I feel like most enemies are 2 or 3 agility, so I think Preston could get the L2 to trigger pretty reliably. You can't go less than zero after all. I suppose he could also take Stealth to combo with it (like you can do with Flashlight and LWIF). Not sure what kind of janky Preston deck that would be, but it is an option. — Zinjanthropus · 156 9/3/20
Yeah, it's possible, but are those enemies that Presnton wants to desperately see stuck back in the Encounter Deck as opposed to just killing? Maybe if he was getting mobbed by enemies? — LivefromBenefitSt · 342 9/4/20
An enemy at the bottom of the encounter deck is nearly as good as an enemy in the discard pile, and just as good if the encounter discard pile was getting shuffled back in before the deck would be drawn through anyway. — Yenreb · 9 9/4/20