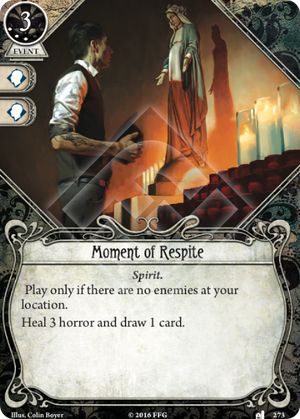 Card that heal, soak, or prevent damage become more valuable and more relevant the worse your campaign is going. The signature punishment of failing a scenario is trauma, whether by being defeated, or from a bad resolution after failing to achieve the set out objectives.

I don't think any card espouses this idea better than Moment of Respite, the card for the mentally traumatised. Three horror healing in one turn with free card replenishment is a great stabilisation tool, and until recently, represented the most healing for one action in the game (upgraded Logical Reasoning now holds that distinction). However, Moment of Respite suffers from a severe case of dead-draw-itis, paradoxically due to its enormous healing potential. Waiting around to take 3 horror, especially since you'll generally try to avoid horror in the first place, can see Moment of Respite sitting pretty in your hand for a long time. While it does have a respectable two icons which alleviate it's dead-draw nature, as anyone can attest, it is painful to commit a 3+ experience asset or event to a test, and lose the value that you were probably going for by including it in your deck.

Suffer three mental trauma however, and this card is another story altogether. It's dead-draw nature evaporates, and now having it in your starting hand is a blessing, not a curse.

I wonder how many people have played Mark Harrigan early in their Arkham Horror LCG career and ended up forced to include this card thanks to Shell Shock. Roland Banks and Zoey Samaras also have low sanity thresholds and weaknesses that incur mental trauma that practically beg for a quick solution. Really any low , low sanity investigator is susceptible to mental trauma, and thus are more inclined to take that card.

Of course, there are, as of Dream-eaters, three investigators that manipulate horror in some respect or other that may take a look at this card: Agnes Baker, Calvin Wright, and Carolyn Fern. Including it in a Calvin deck is dubious, but could possibly be justified as an emergency play if he's playing too close to the edge. While Carolyn does see synergy from the card, she would much prefer more incremental healing to maximise the value of her special ability; still, if you're running a HEAVY horror incursion deck, then you'll need all the horror healing you can get.

And then there's Agnes Baker. I think only she would include this card in her deck even when things are going well, as not only will she likely be deliberately taking horror through the likes of Forbidden Knowledge, but she also very much never wants to take mental trauma in the first place, a scenario Moment of Respite is very good at preventing.